This weekend, flags will be a-flyin’, firecrackers a-poppin’, politicians a-pontificatin’, and barbecues a-grillin’ as our nation celebrates its 240th birthday amid the usual pomp and turmoil. Our national patriotic selves are in particularly high dudgeon this election year, when we all play the game of Why Do We Have an Electoral College, Again? Some you will be tourists, traveling to national parks, or perhaps to our nation’s capital (I hear there’s some GCLS thing coming up soon?)  ‘Tis also a fine time to play another fun game of history, Who’s Your Favorite President?

Was Lincoln your favorite because he believed in the equality of all individuals and the strength that can come from a united people under a good central government? How about FDR shepherding the country through the miseries of the Depression and anxieties of world war? Jefferson, articulating the freedoms that prompted us to start our grand experiment of independence? Or is it some prez that you lived through more recently? (Though I’d argue anybody after 1976 doesn’t give us enough perspective to evaluate fairly.) Or do you think picking the best president is Uncool, too Nerdy for you?

Nerdy or not, I submit for discussion, Mr. James Madison. He deserves his own carving on Rushmore. He should have his own obelisk on the National Mall, his own memorial next to the Potomac. And it should be the biggest.

I’m not a huge fan of George Will, but I like how he agreed with me, when he noted:

…if we truly believed that the pen is mightier than the sword, our nation’s capital would have been called “Madison, D.C.”, instead of Washington, D.C.
George Will.

Here are my three reasons for putting Madison on a big ol’ pedestal:

The Little Fella
I think the reason Madison has been overlooked is that he was literally overlooked. He was the smallest president, only 5’4” and 100 lbs soaking wet. (I don’t know if, at 5’4-1/2” myself, I would call that short, but history does). Washington, Jefferson, Lincoln and FDR all topped 6 feet. Even John Adams was 5’7”, and he spoke loudly and frequently to make up for it. Madison was exceedingly modest and didn’t believe in political campaigning or self-aggrandizement.  He was the consummate coalition-builder. No one appeared to consider him a threat, so it’s amazing what he then accomplished.

He was also a poor speaker in comparison to the famous orators, like Patrick Henry, and would often be shouted down in debates. Though when he had to convince Virginia to ratify the constitution, his persuasive persistent arguments eventually beat out Henry’s emotional grandstanding.  A vengeful Henry reorganized the districts and changed the rules to prevent him from running for the national Congress he had just invented.  Madison managed to claw his way back in to the state legislature, according to his accounts, mostly because bad weather depressed the vote. Our nation hasn’t changed much in 240 years – gerrymandering, get out the vote movements, and political chicanery still rule the day.

Land of the Free
Madison was known as the Father of the Constitution. Along with Hamilton and Jay, he wrote the Federalist Papers, the defining set of essays that set the stage for how the founding fathers would establish the rules that we now live by. Hamilton the musical points out that Alexander wrote about 2/3 of the essays to Madison’s 1/3.  However, it was Madison who defended them most strongly in the Constitutional Convention. It was Madison who persuaded Washington to come out of retirement to preside over the process, which gave it the sense of legitimacy it needed to rise above partisan squabbling. It was Madison who negotiated most of the key compromises, defining our bicameral congress with one group based on population and one group representing each state equally. Madison wrote the Bill of Rights. Madison got most of the state legislatures to ratify it.

Heck, Madison was both Father and Mother of the Constitution: he birthed it, nursed it, changed its diapers, taught it how to read, and sent it off into the world prepared to take on all challenges.

The Great Land Grab
He was curiously both FOR a strong central government and against it. He started out a federalist, urging the countries’ rule-makers to create a more centralized structure than the loose confederation of states that existed after the Revolutionary War. But later, in the Jefferson administration, Madison helped dismantle the central bank and dismissed the army to save money, concerned that the new government had too much power. Jefferson supported a strongly theoretical democratic ideal; he believed in the people retaining most of the power and did less to retain the central government than his predecessors — with one notable exception in his administration, primarily due to Madison, his Secretary of State.

In 1802, Napoleon was amassing his armies and annexing Austria, Germany and Prussia. Initially, the French (and Spanish) troops in New Orleans thought it also a promising place for a further expansion of French territory. France had business interests in the Caribbean, but suddenly there was turmoil, and Napoleon was kinda busy in Europe.  When a slave revolt in Santa Domingo lost the territory, he wanted to put his efforts and troops elsewhere, and  Madison was a key playah in those conversations. In the end, France gave up what appeared to be a bunch of swampland –rather hard for it to defend—in exchange for $15 million that it desperately needed. The US got 828,000 acres of land through the Louisiana Purchase, doubling the size of the known country.  Jefferson was for it, but historical accounts give the impression he was merely a bystander to his Secretary of State’s efforts, too busy thinking about inventing the University of Virginia and the swivel chair to do more than nod his approval.

Home of the Brave
As the Napoleonic wars heated up in Europe, both French and British naval fleets were grabbing any ships and sailors that they could. This was called “impressing” troops, but the American sailors taken were un-impressed. Britain also started preventing US ships from trading with France and arming Native American tribes, encouraging them to attack settlers. By 1812, Madison and Congress rightly saw this as the time to establish US sovereignty once and for all; they were not going to be a nation subject to either Britain or France, and they had to prove it. Unfortunately, Madison had done that thing about dismantling the central bank and dismissing the army… oops!

Initial efforts with an incompetent and diminished army were not good. Madison himself led troops in one battle – the only president ever to do so – though that particular Battle (Bladensburg) wasn’t a win. Maybe the troops couldn’t see him giving orders from his horse? The British ended up raiding Washington DC and burning down the White House, though fortunately Madison’s young and vibrant socialite wife Dolley did manage to rescue much of the furnishing and valuables. Madison gets credit, in my mind, for marrying a woman so talented.  Dolley Madison practically invented the state dinner, set many fashion trends, and could still commandeer a caravan to take away key policy documents along with the national china. (Something I could see Michelle Obama doing too…)

After successes in Lake Erie and at the Battle of New Orleans, Madison signed a treaty with the Brits to end the war (named….Anyone? Anyone? The Treaty of Ghent!). Technically, it was a stalemate rather than a win, but who remembers such piddly details?  The success of the war showed that … to put in today’s lingo… America was nobody’s bitch. You have to give Madison credit for leading through that. He was the original War President, and he had the smoking White House draperies to prove it. 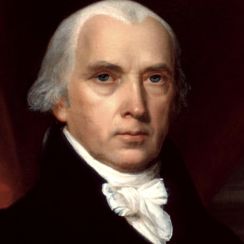 Legacy
Madison was the Dude! HE GOT STUFF DONE. Maybe the best way to let people know would be to write a musical about James Madison, since those are trendy. He wasn’t obnoxious and disliked (see 1776) and he didn’t get tragically killed in a duel (see Hamilton). But he did invent the idea of America, expand land until it became most of America, and then defend against those who would squash America. If we are #1, it’s because of him.

Maybe I should call the musical Madison DC?

0 Replies to “Madison, Our Best President”