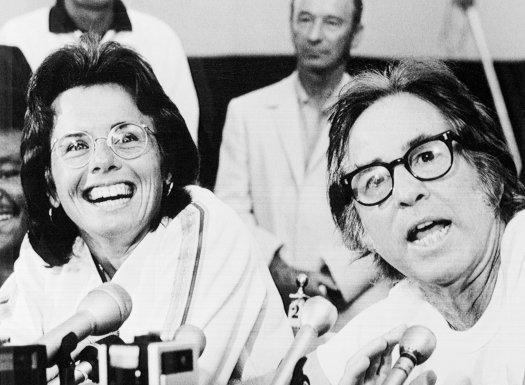 I remember September 20, 1973 when Billie Jean King beat Bobby Riggs in three straight sets at the Houston Astrodome in the Battle of the Sexes.  I remember when Ms. magazine debuted and when Virginia Slims was a sponsor of the magazine and women’s tennis, when people debated about the merits of letting cigarettes bankroll feminism, but feminism needed the money. I recall when it was fashionable for men to call you “little lady” and drape their arms around your shoulders in casual conversation. I remember when tennis rackets were made of wood.

When Rackets Were Made of Wood

The movie, Battle of the Sexes, brings the story of the King/Riggs match to life.  The film gets the tennis right; the film gets a lot of things right. Wooden rackets weighed 25-30% more the aluminum ones, and the racket face was much smaller, which means players couldn’t hit the ball anywhere as hard. Tennis then was much more a game of strategy — ball placement, serve and volley, and the strategic use of the lob. The tennis match choreography shows this to great effect. To the modern viewers, the play may seem oddly lethargic, almost as if it was in slow-motion. That was the reason Riggs beat Margaret Court, known at the time as The Arm because her height advantage gave her more power and a longer reach. Riggs wasn’t faster; he played more strategically and was wilier about placing the ball. After all, if you can play wearing scuba flippers or wearing a hoop skirt, then your play is about wrist movement, not power.

The trailers for the movie and many of the reviews don’t mention Margaret Court, but she’s a core part of the film, which I appreciated. King would never have played Riggs if he hadn’t already beaten the #1 women’s tennis player. The movie even hints at Court’s rampant homophobia which has made recent headlines, a topic that would have not been included in any biopic of this subject made before the 1990s.  Emma Stone is a credible King, but Steve Carrell is a drop-dead perfect Riggs, a showman playing tennis in a dress or with a drink in his hand to win a bet, a game of slow but deceptively accurate shots.

My dad played on the varsity tennis team in high school, during the Jack Kramer years. He taught me how to play, and most of the time we would just hit the ball, though once or twice each outing he would serve an ace at me, to remind himself that he could. In those days, an ace wasn’t just about speed, but about hitting the corner slightly opposite wherever you were standing. I can still hear my whine of “Da-a-addy!” as I saw the ball heading for the corner, and I would just drag my feet as only a ten-year old can do over to the other side of the baseline. I got the impression he could hit that corner at will, and King practices serving at this little pyramid of balls to demonstrate that’s how you do that.

Lobber vs. Libber and the Optics in the Poster

The film also does an excellent job of providing the critical back story for King’s acceptance of the match. When Court lost to Riggs, unprepared and duped into something more than an exhibition match, her loss threatened to derail the women’s attempt to get fairly compensated for the fans they attracted.  Women were being paid only 1/8 or 1/12 of what the men were paid, even when they filled the venues. In 1973, King helped break the women’s circuit off from under the thumb of the old guard and was trying to launch the Women’s Tennis Association to improve prize money and their bargaining position with the U.S. Lawn Tennis Association.

Curiously enough, the movie promoters prove that the struggle for respect continues. My mother, the women’s studies professor, used to lecture on images of women in the media and how they both reflect and influence cultural attitudes and stereotypes. Consider the difference between the actual famous photo of King and Riggs at a press conference, with Billie Jean laughing at something Bobby has said. In the real photo, her head is higher, and she is looking at the audience. However, in the publicity photo for the movie — and this is the movie poster used most frequently as far as I can tell — her head is lower, and she gazes at Riggs laughing as if engrossed in his fascinating speech. Somebody in the marketing department needs to reread Sisterhood is Powerful or The Male Gaze.

Women’s sports has come a long way, but even now, I was appalled to realize that King was the first female athlete to win the Presidential Medal of Freedom and not until 2009. We’ve become accustomed to positive stories about women in sport — of how Title IX provided resources to help women’s soccer dominate internationally, women Olympians earn more medals than men, and women’s basketball to create its own league. Yet, women’s sports still have to struggle for funding, with many of the lesser known college sports — like wrestling, water polo, and baseball — grousing about how much they have to fight for piddly dollars because funding goes to women sports. Less attention is paid to how many sports could be funded just on some of the six figure salaries of assistant football coaches.

There is always the argument that men are physically capable of beating women. This is absolutely true for most sports. Some of the online comments and reviews point out that the average male tennis player today could beat the average female tennis player, or that the best could beat the best. That completely misses the point. Of course, Rafael Nadal could likely beat Serena Williams. Jimmy Connors beat Martina Navratilova, and she wasn’t surprised by it. The question was never whether women or men, in general, were better tennis players. It was about whether it’s exciting to watch the best play, about whether the best women who pack the Wimbledon Finals stands should get paid close to what the best men who pack the stands get paid. 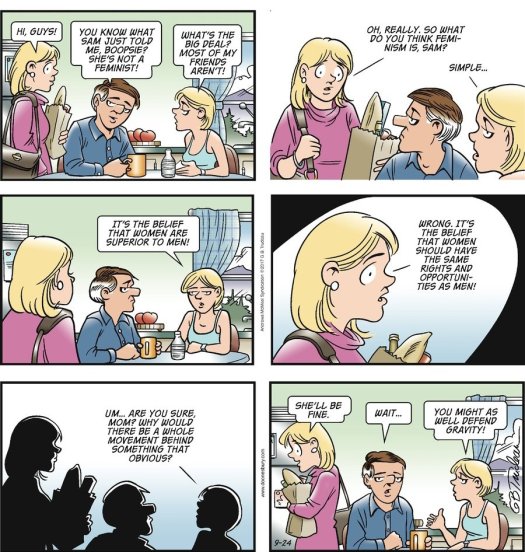 The issue that King was facing was whether any run-of-the-mill, second-rate, old, and out-of-shape tennis player, like a Bobby Riggs, could beat any woman. In 1973, that was the thought, and the Riggs/Court match seemed to prove it. That’s what Billie Jean King had to disprove. After the match, when she sits for a moment, letting the emotion wash over her, it’s with the realization of how much was at stake.  All respect for women’s tennis. All respect for women’s sports. All respect for women, anywhere.

The best single shot in the movie came for me as viewers in the Men Only lounge are being served their single malt and martinis by a scantily clad waitress while watching the game. As King starts to trounce Riggs soundly, the irritation causes them to grimace like they were eating bad peanuts. The camera closes in on the waitress’ face as she slowly smiles in the dim light. All respect for women, anywhere.

In September 1973, I remember going with my mother to Lou’s Bar Stools, Diners, and Dinettes on Arden Way in Sacramento for a dining room table. As I’ve hinted, my mother the college professor was comfortable in front of an audience; she was brash and outspoken.  The gray-haired stick of polyester that came up to help us started calling her “Honey.” She started to banter back, calling him “Sweetie,” her voice on edge. They kept it up, both with a friendly grin turning to a rictus of irritation.

Of course, I was mortified.  I was twelve and anytime my mother made a scene– which is how I described anytime she said anything in public–I would get embarrassed. Forty years of perspective taught me that was more about me the adolescent than her the grown woman. Thirteen years later, as a newly-minted Chicago MBA starting a prestigious job as a corporate financial analyst, I plastered that same grin on my face when one of the managers suggested I make the coffee. Because I came in early, you see, so it was only logical. I channeled my mother as best as I could and told him quite clearly that I didn’t drink coffee, so I had no intention of making it. I don’t know if that gained me his respect or better pay; I was always convinced I wasn’t paid as much as male colleagues. But it gave me a lot more self-respect.

The Political is Personal

For a little while in 1973, I thought about picking up tennis seriously, maybe playing it in high school. I bought a Billie Jean King poster for my bedroom wall. I took a tennis unit in P.E. and wasn’t the worst person in the class.  I had a decent forehand, although I could never serve quite right. My dad had that monster serve, accurate and hard, but he jerked his elbow in a way that hurt when I tried to imitate it, especially as the vibrations from the wooden racket would travel down my forearm.

My parents got divorced in 1973, when my mom moved out to California to take a much higher paying job. I would play tennis with my dad in the summers when we visited. He was always respectful to women, never condescending or belittling, the way some fathers are. But watching the movie, it hit me like a ton of bricks that the match was a little Freudian for me, a little of dad vs. mom, tennis vs. feminism and the need for women to be respected for what they are and can do.

Second wave feminists used to repeat the phrase like a mantra: “The personal is political.” It would be good for us to be reminded of that core notion.  Personal experiences are often representative of cultural actions. Actions you take personally are always political actions. So, too, do politics and history affect your opportunities; cultural barriers end up serving as personal barriers.  Feminism, as we feminists have had to keep repeating for twenty–forty–sixty years or so, has never been about proving girls are better than boys. It’s about allowing every person to live up to their full potential, allocating resources to them fairly, and rewarding them fairly. That’s a message that’s true of women as well as of people of color, people of all ages, of all abilities, of all cultural backgrounds. It’s a message just as true in today’s political climate as in the fall of 1973, under the strange spotlights of a mere tennis match, which changed the world.

Today’s blog is brought to you by the DailyPost word: fashionable

Next Week — on the road again, we’re traveling in the Southwest — the Land of Rock and Cactus

0 Replies to “Battle of the Sexes: The Political is Personal”