A lot of angst-filled snippets are filling social media over Kenneth Branagh’s new version of Agatha Christie’s classic, Murder on the Orient Express.  People don’t want to see it because no one could be a better Poirot than David Suchet. Or they loved the 1974 production with Albert Finney so much, what could surpass that? Branagh’s moustache looks silly. Who does he think he is? Why mess with the “original”….etc. etc.?

Time out. Let’s talk about covers.

The Beatles Love It When Other People Do the Beatles

A cover is a remake.  It should be different but pay homage to the original. There’s an interesting side discussion about whether the word “cover” was specific to white bands covering black artists’ material which you can read here . Let’s bypass that issue; the notion of a cover is more generic in today’s vernacular. Mozart covered Bach. West Side Story covered Romeo and Juliet.

Suppose there is a great or even the best example of a performance. Should there ever be allowed a remake?  To say that people should not see a rendition of this movie or that song is to suggest that covers should not exist at all, that the “original” should be preserved pure and intact as if it could be ruined by someone else attempting another version. As a general rule, this is idiotic. It would wipe out most renditions of Shakespeare and more than half of contemporary music. And the original artists wouldn’t be in favor of it. The Beatles’ might think their version is better, but they love to get the royalties from other people covering the Beatles.

Remakes have a vaunted history that stretches back centuries. Curiously enough, while I was writing notes for this essay, I happened on a comment from an expert on artists from the Middle & Renaissance Ages who put it this way:

What we might call plagiarism today, medieval writers considered an admirable skill. Writers like Chaucer, Malory, and … Shakespeare were all working with ‘received material’ that they were cleverly reshaping to please a particular audience. To do this well, to rework a well-known story, was considered a much more impressive feat than to make up something completely new.
–Professor Dorsey Armstrong

We could even make the same argument today. If there are dozens of versions of Sherlock Holmes or Scrooge, isn’t it more daring to do something new? Doesn’t take that potentially more skill?

There are certainly pointless covers — remakes that have no spark of originality whatsoever.  See, for example, David Lee Roth’s note-for-note repetition of the Beach Boys’ California Girls. Big-budget movie remakes of TV shows are frequently bad;  Lost in Space and the Wild Wild West (Branagh again!) enveloped bad but not fun-bad acting with overblown and pointless special effects. We can evaluate the cover on its own merits, good or bad.

It also doesn’t take long to think of covers that take a new and wonderful angle on the original — Regina Spektor’s Japanese-style While My Guitar Gently Weeps, Benedict Cumberbatch’s modern Sherlock, or the great 1960s versions of Summertime by Janis Joplin and Billy Stewart, both different from each other and from the operatic style of  Porgy and Bess. Even all the movie versions of Murder on the Orient Express are essentially remakes, since they are new versions of Christie’s novel.

Yes, Virginia, They Can Be Better than the Original

A cover can certainly surpass the original, and I’ll offer two examples. Jimi Hendrix’s Purple Haze is a masterpiece of psychedelic rock and inventive guitar playing. But track down the Buddy Miles/Bootsy Collins rendition with the London Symphony, and I guarantee it will be the version you prefer.  Especially in a car, in the summer, with the music turned up and the windows rolled down.

When Peter Jackson wanted to make Lord of the Rings, Tolkein scholars lost their merde at the very concept. Tolkein could never be improved upon! The medieval poetry section with Tom Bombadil is a masterpiece… how dare anyone Hollywoodize this Pre-e-e-ecious?  Horsepuckey! Tolkein’s trilogy is flawed.  Fellowship is soporific for fifty pages until the flight to Rivendell. Two Towers is actually written as two half books as if Tolkein didn’t know how to weave multiple stories together. Return of the King ends on page 310, then the troop spends another 75 pages wandering back home, only to fight another anticlimactic battle before a very long goodbye. Peter Jackson repaired the plot flaws and took out the medieval poetry (and Tom Bombadil, thank goodness). It’s quite possible to fix even a masterpiece.

Which brings us to Christie, Poirot, and the train from Istanbul to Paris. I’ll lay it right out there: David Suchet was the perfect Poirot. A classically trained actor, he ended up filming all 33 novels over what turned out to be a 25-year span. He looked the part. He had the mannerisms that fit the idea of the character down to the gunmetal-gray gloves. Still, he was not the first and need not be the last. Charles Laughton first played Poirot in the theater. The fussy Belgian detective was also covered by Albert Molina, Tony Randall, Kōtarō Satomi (in a Japanese anime version) and Peter Ustinov. Ustinov, in fact, did six movie versions; one story claims Christie’s daughter said of Ustinov in rehearsal, “That’s not Poirot!” to which he replied, “He is now.”

Albert Finney might be the best known from the movie version of Orient done in 1974. Finney was heavily-padded and covered in makeup. He constantly cocked his head to the side and seemed to wink with every other word. The role was nominated for an Oscar, but, for the record, I found it off-putting. His performance — like that of most of the other actors in that version — seemed designed to draw attention to itself rather than the story. The movie feels more like a Hollywood costume party than a script. Yes, Ingrid Bergman did deserve her Academy Award for the one understated performance of the ensemble, but Bergman could win an Oscar for reading the phone book.

The Suchet version, made only as recently as 2010, feels like the Christie classic. The look is right — down to the diligent recreation of the luxury of the train — and the script delves into the ideas of vigilante justice better than the original book does. That rendition takes the mannerisms of Poirot, the plot twists, and combines them into something more. Not all viewers liked it (“Why do ‘Artists’ Feel the Need to Reinvent Christie????!!!????”), many lamenting the darkness of the characters and longing for the warm and witty version of murders that they enjoyed before. Even Branagh wasn’t the first to be criticized for doing something differently.

The Moustache in the Room

A lot has been made, to start with, of Branagh’s moustache. One reviewer suggests Branagh’s motivation (he made the film) was to have it be at least three times as big as Albert Finney’s. Another says it looks like “a tiny but majestic falcon has parked under his nose.” It winds around his face. It’s a different color from his hair. It seems to have two or three endings.  At first, I thought it looked ridiculous but then realized, that’s the point. The more Poirot appeared on screen, the fonder I grew of it. I could almost imagine a Monty Python skit with the ‘stache, interviewed plopped on a chair by itself, “Well, David, we were stuck on location in the Alps for aaages….” Branagh said the moustache was his superpower, and I have to agree.

Another heavy criticism of the 2017 movie is for added material, not in Christie’s book. It’s worth noting, then, that the Suchet’s version also added material and was heavily criticized for it. The Finney version also took liberties, by the way, just like Sondheim, Bernstein, and Arthur Laurents took liberties with Shakespeare in making West Side Story and Shakespeare took liberties with the Roman Plautus… and we’re back to the beginning… are we allowed to redo someone’s masterpiece?

The other big elephant in the room that Branagh was dealing with is knowledge of the other movies. Christie fans knew the ending before the 1974 movie was made, but most audience goers didn’t. But now… where many viewers might have seen the Finney version or the Suchet version or the Albert Molina version… or might see offhand references in posts that don’t say SPOILER at the top… the story itself and the solution are already known to many. Branagh needed to present something that didn’t hang on that solution. Hence, he added material to set up Poirot’s character and focused some of the action on the mechanics — if you know the story, can you catch how it’s unfolding? This version can be more like a Columbo episode as you put the clues together with Poirot.

If you grant Branagh the premise that he had to do something different, to put a stamp of originality on a version among many others, and to make it memorable without ruining the essence, then you will find the movie works very well. It’s executed properly, like one of Poirot’s three minute eggs. The scenes of the train in the hills are breathtaking. I want to ride on that train!* Michelle Pfeiffer is hilarious. Josh Gad and Daisy Ridley strike the right notes. Judi Dench can read the phone book. Johnny Depp is repulsive, but that’s his character.

You can discussion which character you like or dislike. You can discuss which Poirot you like the best and whether the scenes on the train do justice to luxury of the Orient Express. There’s a lot to discuss.

Which is ultimately, the point of a cover. By taking off from an original and making its own mark, a good cover provides plenty to think about. It even allows you to speculate about other versions. Poking around the internet, I found a photo that muses at the possibility of a Sam Jackson-based Poirot. Forgive me the vulgarity for sharing it, but that’s a version I’d very much want to see him try. 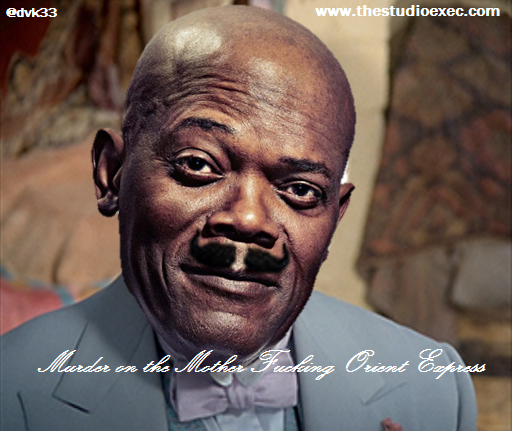 Today’s blog is brought to you by the Daily Post word: Snippet

*A really fun 2010 documentary is a travelogue of David Suchet riding the Orient Express, in which he reveals that he’s a total train geek and positively vibrates with glee when he is allowed to sit in the driver’s seat. If you’re a Suchet fan, you should see this!