I try to be open-minded. It’s a big, complex, diverse world of ideas out there and even though everyone else is not as correct as me, they might have something interesting to share.

I did make the mistake of reading the op-ed page of the Wall Street Journal. I opened it because I do respect the general journalistic approach of the paper – compared with what passes for journalism these days – and because I was lured in by the article on, what else? basketball. I mused over the opinion piece by Pfizer’s CEO that it’s disadvantageous for them to be prevented from merging in order to shelter profits offshore from US taxes. I was confused by the blurb that seemed to urge people with gluten allergies to be tested, since it ended by saying the gluten free paranoia would turn out to be fake, just like the fear of fat.  The piece that really got me was on climate change.

I will comment in advance that I have been trying to avoid discussing political topics in this blog. I know we all are exposed to such discussions in many other places, far more than we wish. Even now, I do solemnly swear not to say anything about any presidential candidate or elections until after Halloween, unless it’s to comment on how exhausting it has all become.

So I am trying not to stir the pot just to do so, but I have trouble understanding the continual resistance to climate change. When I was in college thirty years ago, when some of the early scientific data was being produced, there were discussions about “whether” climate change was happening…. But now we have an awful LOT of evidence. There are bloomin’ pictures; for example, here is the Muir glacier in Alaska comparing August 1941 to August 2004.  Articles every other week talk about the shrinking polar bear, seal, and fish populations. Russia has started drilling for oil in areas of the Arctic where ice has melted. 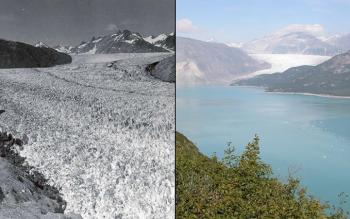 Meanwhile, in the Journal last week, Bjorn Lomborg published a 950 word article entitled “An Overheated Climate Alarm.”  The key takeaway was that a recent scientific assessment by the US Global Change Research Program overstates the impact of global warming by focusing only on the deaths from heat: “The Obama White House launches a scary campaign about deadly heat. Guess What: Cold kills more people.”   The essay concluded that the government is being misleading by focusing only on the bad things about global warming, and because more Americans are moving to Florida and Arizona than Minnesota, it proves people are smarter than the government.

You can look up the article or one of the dozens of reposting of the article. You can also read the fascinating 970 comments on the Journal’s site, which start out with some sober analysis of how some facts might have been misinterpreted by Lomborg, and then strays away from the article and devolves into name-calling between the commenters (warmunistas, the Climate Cabal etc.).  These discussions that purport to “debate” climate change seem to take a standard form, like a Latin Mass. Someone publishes some facts: here is some data about climate change.  The counter-argument then offered is:

I don’t get it. I don’t get the resistance, the name-calling, or why so much of our intelligence is focusing on the discussion and “debate” rather than the solutions. But another recent study may help enlighten me.

Researchers led by Dan Kahan performed a study to understand the relationship between scientific savvy and beliefs held on climate change; these results were published in Nature Climate Change, which I stumbled upon in a review on “Why Smart People Deny Climate Change” by David Berreby in BigThink. (Which itself turns out to be a very interesting site on its own merits!)

It’s easy to think that this resistance is only from corporate entities (“it’s all the fossil fuel companies”) or people just being ostriches, but the researchers found more. As Berreby describes it, “They compared 1,540 Americans’ views on the risks of global warming with their scientific literacy and ability to reason logically and mathematically. Result: Higher scientific literacy and reasoning skill correlated with lower levels of concern about climate change. Which means that bombarding people with scientific facts is not going to lead them to change their minds.”

What Kahan’s group determined is that people in the US tend to self-identify into two groups, as either “hierarchical-individualistic (let people alone and respect authority)” or “egalitarian-communitarian” (we’re all in this together, so let’s be fair about it). If you’re on the egalitarian side, and you’re scientifically competent, you are more concerned about global warming. But if you’re on the individualistic side and you’re scientifically competent, you are less concerned about it.

It sounds crazy but it starts to explain a lot. Because climate change has been associated with certain politicians, certain political stances, it has now become interpreted as its own kind of flag and that flag-waving means more to people than facts.  Their conclusions were helpful. There are some very specific suggestions in the paper (http://papers.ssrn.com/sol3/papers.cfm?abstract_id=1630002) about factoring in cultural stances into arguments rather than only focusing on the statistics. As Berreby nicely summarizes it:

The paper therefore implies a truly post-rational vision of politics—not a battle of ideas and interests in which all players keep an accurate score, but rather a kind of theater in which our emotional selves display solidarity with our chosen teams, and reason supplies the justifications for what we would do anyway.

If you want to persuade someone, consider presenting the information in a way that affirms their cultural identity rather than trying to destroy it. We all probably know this, but I found it compelling to be presented in a nice cuddly warm blanket full of facts from a research study.  Include a diverse set of viewpoints in your panel of experts. We don’t make any progress if we devolve into name-calling, and we can’t rely on persuading other people just with floods of facts.

It does help me understand why there’s so many ideas floated that seem to be crazy, even today when so many more facts are available at our fingertips.  I will pledge to stay open-minded and to understand other points of view, at least until the name-calling starts. Though I might stay off the Op Ed page of the WSJ and just stick with the excellent articles, about the competitive advantage of… MY favorite Sportz team! And I can also continue to work on ways to make my gardens more drought-resistant. Because cultural flag-waving or not, I know how to read a graph.

Note to Readers: We are taking the Big Trip next week. I am hoping to write a travelin’ blog, which may include a few short entries, and some other super-fascinating essays about what we see. However, internet service is a bit of an unknown. The weekly entries may be irregular but will be there. Do not despair!