Sherlock Holmes playing the violin while puffing on a pipe, gray smoke misting the air like thoughts of inductive reasoning… Hercules Poirot sipping on his tisane while musing with his little gray cells…Mr. Monk framing the room with his hands… Columbo, hand to his forehead, dripping cigar ash on his raincoat…such detectives have captured popular imagination for centuries and are among the most famous of our modern heroes. Mysteries have nearly eclipsed novels as popular reads. Agatha Christie is called the world’s best-selling author with two billion sales of her 66 detective novels.

How did we get here?

Most discussions of the history of the mystery define the universe as related to detective fiction — a premise I grant — and suggest that Poe’s “Murder in the Rue Morgue” was the beginning of the mystery. But let’s go back a little further. How does Poe’s 1841 short story about a detective, C. August Dupin, arise into existence? What were detectives before then? Didn’t anyone write short stories? Didn’t anyone write stories about people who investigated things?

In the beginning, or at least in the beginning of Europecentric thought, religion ruled the roost. If you go back to the origin of the word mystery, it’s derived from the Latin word mysterium, which refer to a mystic presence, or hidden religious symbols and the Greek mustes, the initiated one.

Mysteries refer originally to a set of practices followed by worshippers of a particular deity. There were Eleusinian mysteries as well as Mithraic, Dionysian, Isis (not that Isis, the Egyptian fertility god Isis), Orphic etc. All of these cult practices re-enacted stories about the gods, often to help with the harvest. For example, the Eleu… I’m not going to spell that again … the first one on my list was about Persephone, daughter of Demeter the goddess of harvest, stolen by Hades; re-enactment often involved symbolic harvesting of grain. It’s possible hallucinogens might have been involved (great article by Mental Floss on the topic here.)

Over time, as the Greek and Roman states fell and the Christian church concentrated knowledge and power during the “dark ages” of medieval Europe, the church continued to dictate thoughts and practices. Mystery plays and miracle plays emerged as sanction stories, acted out for the mostly-illiterate population.  Mystery plays were stories that sprang from the Bible while miracle plays concerned actions by the saints. One of the earliest Mystery plays, Quem quaeritis, was about the angel at the tomb of Jesus meeting with the women who came to retrieve Jesus’ body. What happened to Jesus could certainly be termed one of the earliest mysteries!

The plays became very popular and, one can surmise, “entertaining,” which might have started to irk the church. In 1210 Pope Innocent III banned the clergy from producing the plays, and their creation was transferred to the local craft guilds, which links back to the word ministerium, considered to be an alternate source of the word “mystery play.” Productions got even more elaborate, with plays now taking hours or days to perform, turning into cycles, sequels, and epics. The York cycle consisted of 48 separate pageants, the Towneley collection, 32 pageants. For example, one story written in the early 1500s,  called the Second Shepherd Pageant, featured Mak the sheep stealer and his wife Gill in what Wikipedia describes as a “burlesque of the Nativity.”

Those huge cycles help explain to me why Shakespeare’s 37 plays wasn’t described at the time as the massive effort we think it today. Writing about a hundred years after the heyday of the mystery plays, Shakespeare’s output would have been right in line with the Wakefield and Towneley cycles.

To abbreviate the rest of history, Gutenberg invents the printing press around 1440 or so, literacy starts to rise which provides storytellers the opportunity to write down their ideas, short stories and novels come into flower over the next two centuries, and hey presto! we get Holmes and the meerschaum pipe.

But, wait a minute! I’ve explained how popular series evolved out of the notion of religious-themed mysteries. But where do the detectives come from? Did Poe invent thinking?

Poe called it ratiocination, the process of exact thinking or reasoned train of thought. For the origin of exact thinking as far as Western Civilization is concerned, we would go back to the Greek philosophers, specifically Aristotle. Aristotle is the most well-documented person to have posed the idea that you should use facts, evidence from the real world, to make a case and a prove a point. (Yes, I know, using evidence to make claims, such a quaint idea in the political spectrum of 2017!)

The Greek ideas were fairly radical and clashed with those from the monotheistic churches, which first sprang out of the middle East (Judaism) then through Rome and across Europe (Christianity). The monotheistic churches said (and I know I am reducing centuries of theory here, I apologize) — God will tell you what you need to know. Some of it is written here in these books, i.e. the Bible.

There was a struggle for a few more centuries over how people ought to think about things, the Church being mostly in charge, most people living in disease and sewage so not caring, Islam developing in the Middle East and creating great ideas about mathematics, architecture, and science… anyway, at one point, this guy in France named Descartes decides to sort of cheat and say, “I think, therefore, I am” but also “God is not a deceiver.” In other words, I can know things in my mind and God won’t deceive me about everything, so some of those I can think are facts.

Pretty soon, it’s the Age of Enlightenment, development of scientific practices and methods, and the discovery of steam engine and pasteurization and balloons and pretty much there’s Sherlock Holmes, there you go.

I did skip one interesting part. Other than the Crusades and Galileo and all that. There’s an interesting analysis on the earliest development of autopsies — clearly a topic related to today’s detectives and their novels. A long analysis posted on Reddit (I haven’t verified all the facts here, but let’s trust them for now) talked about the influence of the Catholic church on the development of some scientific practices, like autopsies.

…Stories [came] from Regestorum sive epistolarum, a decretal of Pope Innocent III in 1209. Decretals were issuances of judgement on a variety of ecclesiastical matters, ranging from theology to canon law. In these cases of death involving clergy, both matters were submitted to the papacy for judgement and so come to us with the grounds for decision: the testimony of investigating physicians and surgeons.

In the case of [a] chaplain chasing the thief from his monastery, the matter was a question of establishing the chaplain’s guilt according to Canon Law which stated that when several people are involved in a brawl and there is a death, the person who strikes the lethal blow was guilty of the homicide. Innocent III requested the testimony of expert physicians, and after receiving a report of their autopsy, it was declared that the chaplain did not strike the death blow [peritorum judicio medicorum talis percussio assereretur non fuisse lethalis].
–Posted by Idjet on Reddit, in 2013

So Innocent III in 1209 created a path for physician’s evidence to influence judgment. This is a good reminder that the judicial process itself had already existed.  Judges had to decide all sorts of cases — who stole your chicken, whether that guy’s fence is on your property, who impregnated your daughter, etc. They listened to testimony of witnesses and issued rulings. Stories about them weren’t being written, but a fact-finding process existed.

And, yeah, that’s the same Pope Innocent III who pulled the mystery plays out of the churches, so A-Ha! The plot thickens...(a phrase which comes from 1671’s The Rehearsal in which…oh never mind…)

It’s not that big of a hop, skip, and jump from autopsies and judges to detectives, even though it may have taken centuries. For quite a while, enforcers were primarily focused on measuring adherence to church doctrine, leaving the chicken stealers to local magistrates. Eventually, the secular enforcement came to rein supreme and the local “politia” — enforcers who measure adherenced to public policy — came into being, using facts, evidence, and testimony to determine guilt and innocence.

The Hero in the Series

The last piece of the puzzle worth mentioning is the proliferation of detective stories. It once occurred to me that the popularity of detective series is unique in itself. What other story mode allows for 26 or 66 or 100 or potentially infinite amount of tales using the same character? Any other story aimed at adults that takes that form has to be historical — either micro-focusing on daily interactions like a soap opera or spanning generations like Game of Thrones or Star Wars. It’s hard to conceive of a recurring story using the same character to be satisfying. If the character isn’t solving a puzzle (detective), then a lot has to happen (adventures). The detective is a primary type of character who can drive the action in a recurring narrative.

Modern protagonists — in our post-existential, post-alienation, post-modern times — are hard to serialize. Once anti-heroes became popular, and stories centered on Willy Loman, Holden Caulfield, Jake Barnes, or Yossarian, it becomes quite difficult to have a second book. What’s the sequel to Anna Karenina? In contrast, Hercule Poirot can always gather the group together in the drawing room to unmask the liar. A hundred years later, more writers can generate Holmes and Watson stories to explore how to determine a person’s history from the twig on their shoe and the smudge on their index finger. The writers tire of it before the reading public does.

But then, 48 pageants and Mak the Sheep Stealer suggest that interest in the serialized mystery — whatever form it might take — goes back a long way. 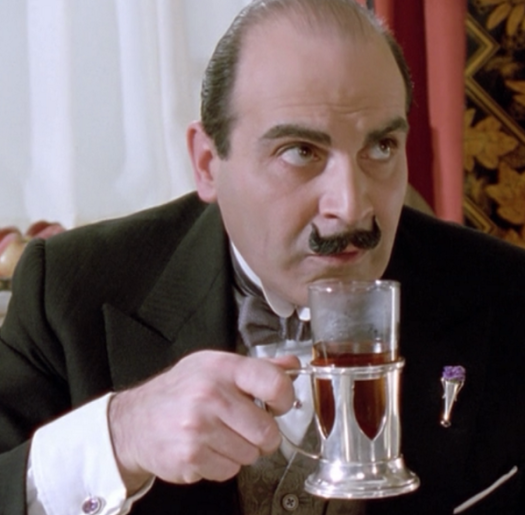 Today’s blog was entirely inspired by the Daily Post word of the day: Mystery

0 Replies to “‘Tis a Mystery: Where Do Mysteries Come from?”