Start where you are;
Use what you have;
Do what you can—
Arthur Ashe

Since it is Black History Month, I thought Arthur Ashe would be a fitting subject for a profile as he happens to be the author of my Favorite Inspirational Quote of All Time. I heard that yesterday was also National Black HIV/AIDS Awareness Day, and Monday was the anniversary of Ashe’s death from AIDS-related complications; it was a sign!  I remember him winning Wimbledon in 1975 in very dramatic fashion. I remember him speaking out about apartheid in South Africa. I remember him as one of the first to publically announce he had AIDS, and his passing in 1993.

Little did I know!

The dude was a charitable foundation, social justice, human rights badass. His life was full of challenges and struggles, but every time he ran into a personal issue – which he resolved – he would turn around and create an organization to raise awareness and help other people so they wouldn’t face the obstacles that he did.  First black tennis player to play in a tournament under apartheid? He created a tennis center for blacks to play in South Africa. Had quadruple bypass surgery? Became national campaign chairman for the American Heart Association for a year. Contracted HIV from a blood transfusion during surgery? Created the Arthur Ashe Foundation for the Defeat of AIDS.

And all before the age of 50. Honestly, as I read through his biography and the works on the AALS (Arthur Ashe Learning Center) arthurashe.org website, it seemed a little ridiculous. How could one person get all that done?  I remember Arthur Ashe when he was alive, and he displayed such dignity and class, that it’s impossible to imagine any of it was exaggerated. Plus, I remember him doing these things.

But I’m getting a little ahead of the story. To start with, Arthur Ashe was born in 1940s Virginia, so that tells you much about the patience and fortitude he would need to exhibit growing up in the segregated south. His mother died when he was only seven of cardiac-related problems that arose from her third pregnancy. Father Ashe, a handyman for the Richmond Recreation Department, raised Arthur and his brother with a firm but loving hand. In his autobiography, Days of Glory, Ashe said whenever he felt like transgressing, he was kept in check by the thought of his dad flying out from Virginia to wherever he was – Washington D.C., California, South Africa  –to “give him a whupping.” Because in those days, dads would do that – they would come find you and set you straight. Ah, nostalgia!

His life changed when a local expert put a tennis racket in his hand at age seven and his natural talent was immediately apparent. It was Althea Gibson’s coach, Robert Walter Johnson, who showed him how to improve his technique and taught him to exhibit the combination of sportsmanship, etiquette, and composure for which Ashe became known.

He was told to return every ball that landed within two inches of a line and never to argue with an umpire’s decision. –Wikipedia

Tennis has now gained a reputation as a country club sport where top players come from wealthy families with a plethora of specialized schools and coaches – some of that is true. The stereotypical tennis instructor is blonde, not African-American. But tennis in America, especially in the 1940s and 1950s, was also a playground sport, as much as basketball or baseball. It requires a court on asphalt, but not a lot of other special equipment. My dad was on his high school varsity tennis team in Detroit, and he played every Sunday until he was in his fifties, as soon as the ice melted in the spring. Never at a country club.  He taught me how to smack the water off the ball if it lands in a puddle. Tennis is a sport that almost anyone can learn and become proficient at with practice. In that sense, tennis is an equal opportunity sport.You don’t need to be wealthy. You just need to be good and Ashe was.

Ashe became the first African-American to win the National Junior Indoor tennis title in 1963. This was after developing his game at a St. Louis high school, where he moved because he could not play white players or on indoor courts in Richmond in 1960. Between 1963 and 1978, he won 33 singles and 14 doubles titles. Winning the US Open in 1968, he became the first African-American man to win a Grand Slam event. In his heyday of expertise in the mid 1960s, he won several million dollars playing year round …. Oops! Sorry, strike that. He was compelled to stay as an amateur in order to play in the Davis Cup which he did for several years. Since he was on a tennis scholarship at UCLA, he also earned a bachelor’s degree in Business (while becoming NCAA singles champion).  He then enlisted in the army (which had helped with his tuition) and spent two years at West Point working as a data processor and running the academy’s tennis program.

Can we imagine any tennis player, basketball player, or football player today coming out of college with a top ten national ranking and enlisting in the army?

He turned pro in 1969 after leaving the army. At the time, he was not a politically active person; he woke to political consciousness slowly but surely as the rest of the country did. He tried to play in the South African Open in 1969 but was denied a visa because he was black. He kept pressing and finally was allowed to play in South Africa in 1973, the first black ever to play in a professional championship during those days of apartheid. What he saw affected him deeply, and only a year later, he worked to erect the Arthur Ashe Tennis Center in South Africa so that blacks would have an opportunity to learn and play in their country. Later, in 1977, he decided that boycotting South Africa was a better option since they showed no signs of moving towards integration.  He started to campaign for sanctions and to maintain the ban against South Africa in the Olympics. During a protest in 1985, he was arrested at an anti-apartheid rally outside the Washington D.C. South African Embassy. He was later arrested at a protest in 1992 in D.C. as a rally against the crackdown against Haitian refugees. 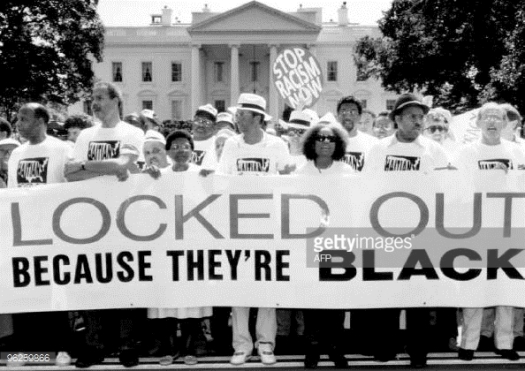 Wimbledon, 1975, was a match for the ages and a triumph of patience over aggression. In the first all American match since 1947, Jimmy Connors was very heavily favored as he was the best in the world at the time. He style was powerful and aggressive, but he tended toward the impetuous and the rash. Taking risks in tennis is a double-edged sword. Better players serve and volley, run to the net to take difficult shots that are unhittable. But doing it requires precision and leads to a lot of unforced errors. Ashe focused in the on control and accuracy.

There was also a little history between Ashe and Connors. Nothing like the trash talking that happens today, of course. A dispute had occurred between Ashe’s Association of Tennis Professionals (ATP) and Connor’s World Team Tennis (WTT) group which led to Connors being denied entry at the French Open. There was a pending lawsuit between the two. Connors was boycotting Ashe’s beloved Davis Cup, which Ashe felt represented America as a team playing the world. (At the time, tennis was not an Olympics sport). At Wimbledon, Ashe wore symbolic USA wristbands and his Davis Cup warm-up jacket, which probably started Connors steaming. And Connors was never a calm guy, not a master of composure and etiquette.

Ashe was 32 and playing his best tennis. But he had never beaten Connors. Connors was a little over-amped, and when he started to make errors, he couldn’t seem to stop. Ashe was the Chris Evert in that match, staying back and swallowing up those serves. Just hit it back and hit it accurately. When he won, it was a milestone, a quiet display of excellence. And one for the ages.

Ashe confounded him. He threw him junk. He chipped and he dinked, mostly to the backhand. He tossed up lobs, He served solidly all the way through and his forehand…was a tower of strength in the in-fighting around the net. –Sarasota Herald-Tribune, July 6, 1975.

Ashe was still playing in 1979 when he somewhat unexpectedly suffered a heart attack. As it turned out, both parents had a history of cardiac disease, so he seemed genetically marked. After he recovered from a second surgery in 1983, he chaired the national American Heart Association campaign.  Since he apparently had too much free time on his hands —  running national campaigns, founding the National Junior Tennis League, protesting, and sitting on the boards of corporations like Aetna —  he decided to write a three volume series on African Americans in sport. A Hard Road to Glory was finished in 1988 and remains one of the definitive research standards on the topic.

A blood transfusion during the second surgery turned out to be HIV-infected. In 1988, he started exhibiting symptoms that were eventually diagnosed as from diseases that AIDS patients were developing. At this shameful time in history, AIDS was still called a “gay plague” and people were still fearful of catching it from casual contact, which we know now is not possible. Ashe writes in his biography of knowing, once his illness was public, that every action would be scrutinized, for example, that plates and cups in restaurants where he ate would likely be thrown away.

Because the stigma would hurt his family (especially two year old daughter) and impact all his work, he kept the news private until USA Today forced him to go public by threatening to out the story in 1992. The announcement was a painful decision. Ironically, because of his spotless reputation, his publicizing the illness helped remove some of the stigma. He worried that the corporations would ask him to leave his board service; none did. He worried that he would be unable to continue his charitable work; instead, it increased. He ended up speaking at the United Nations on World AIDS day in 1992. And – you know this is coming – he founded the Arthur Ashe Foundation for the Defeat of AIDS and the Arthur Ashe Institute for Urban Health to spotlight issues of inadequate inner city health care.

After his death, thousands visited his casket in Virginia. Richmond erected statues. The U.S. Open tennis center in Flushing Meadows, New York was renamed the Arthur Ashe Stadium. The foundations and associations that he built – with patience and composure – remain strong and managed, continuing the work of service that was his legacy.

My original opening line for this column was “Arthur Ashe was a quiet pioneer for sport and social justice.” After I started researching what he actually did, I felt like a fool. People are only quiet pioneers because we’re not listening very well.