No language on Earth has ever produced the expression “As pretty as an airport.”
–Douglas Adams, The Long Dark Tea-Time of the Soul

An overseas trip always starts as an adventure when you lock your house and put the suitcases in the taxi, but something about the McDonaldness of airplane travel sucks some of the fun out it. As we embarked on this 16 day tour of Ireland, carefully gathering boarding documents and strategizing about packing, hopes were high. However, the ten hour flight from SFO to Heathrow, enduring rude seat recliners, bewildering instructions for which line to stand in for transferring planes, and the ever-desperate search for phone charge plugins had no unique Irish flavor to it.

My biased ignorance about the Emerald Isle consists of leprechauns, shamrocks, and “How Are Things in Gloccamorra.” All of which I know has as much to do with the culture of Ireland as Fisherman’s Wharf does with San Francisco. But I am ready to be a model tourist; I am prepared to look and listen and absorb.

Dublin: Live Music, Golden Torcs, Flying Pigs, and Guinness
Excited to finally be touring Dublin, we checked off several musts. We stood in the queue to see the Book of Kells, that medieval hand-painted biblical text at Trinity College. The exhibit and explanations were elaborate and somewhat more impressive than the faded book itself. Scribes who worked on different parts were identifiable by the artwork they chose to illustrate letters. The elaborate symbols which cover the full-page drawings that have to be explained to us moderns were code to the pre-literate population, who would know full well that peacocks meant incorruptability and grapes referred to the blood of Christ from the Last Supper.

The National Museum which focused on archaeology had shorter queues but was just as fascinating. The mix of Irish gold artwork ranging from neolithic to medieval showed off the intricate skill of the goldsmiths. Torcs of beaten gold were sometimes thin as a whisper or heavy as a chieftain could bear to reflect his status. The Tara brooch caught my eye. Worked in silver gold and jewels, the head of the pin is an elaborate face with tiny designs up and down the shaft, while a snake’s tail would have extended out on the front of the wearer’s cloak. You can almost see it in a hoard of Viking plunder or atop of a chieftain’s thick cloak, reflecting the fires in the hall as he quaffs his beer. 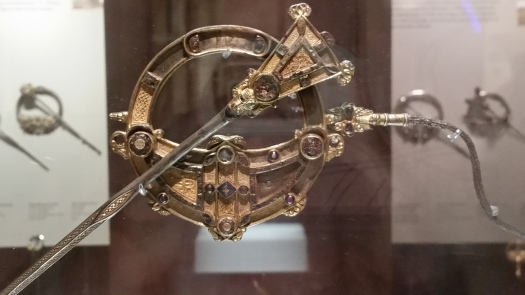 In the art museum, the most interesting exhibit was children’s art depicting “Ireland 2116.” (When you’ve seen enough Picassos and Monets…) Some of the art was wise beyond its years, with a telepathic Celtic warrior women spanning the galaxes. Some was practical –the slide will light up when you go down it and a robot hand will push you. The winner depicted an Ireland with wrought iron lampshades and flying cars, a mix of castles and skyscrapers, with the title: We’ll still be complaining about the weather which is pretty smart for a 17 year old. But I confess to preferring the elementary school age views of Leprechaunia, flying pigs, and the Pink Princess Palace. Because in 2116, who wouldn’t want an Irish Pink Princess Palace?

After the walking, we sat for a pint of Guinness and a chat in one of the 715 pubs in Dublin. Pubs and chatting is a thing that we don’t have in the U.S. – the notion of a sports bar or a wine bar for the young tech workers doesn’t quite get at it. Americans are more likely to sit and chat in a Starbucks, or we don’t sit and chat face to face at all, we just text each other. Chatting seems more civilized. Guinness is so earthy and smooth, it might almost makes me enjoy beer when I wouldn’t normally touch the stuff.

The other reason to visit the pubs was live music, which was everywhere, the way it is in New Orleans. Mind you, it was mostly as our pub mates said, “a bloke with a guitar.”  As we mused over a mellow smoked fish salad and a Guinness and beef pie, the “bloke” at The Norseman played a series of ol’ Irish standards: Purple Rain, Losing My Religion, and then Born to Run. But I will say they sounded like they were supposed to be played that way. Outside, waiting for the bus, a crowd gathered around a trio which couldn’t be seen but most definitely could be heard. Right on Westmoreland street, a throbbing guitar, wailing banshee violin, and thumping drums serenaded us with a cross between an Irish reel and death metal for the 15 minutes until the #16 came.

Newgrange: Ancient Spirals and Fish Pi
We’d been told by our goddess expert friends to remember —  Temple not Tomb. Newgrange, site of a temple from 3500 BC, has been beautifully reconstructed with white quartz built Irish wall-style, nearly without mortar. Inside, the guide showed how the sun comes through on winter solstice morning lighting up pitch black stones for what must have seemed miraculous ceremony 5000 years ago. Newgrange predates Stonehenge by a millennium and the great pyramids by 500 years, yet somehow these Irish tribes pulled those 200,000 tonnes of stones up the hills without wheels, only using logs. As we walked through the grass speculating on the meaning of the spirals and diamonds covered in the kerbstones, a hare was flushed out of hiding and jumped around, irritated at the tourists on his turf.

Only 10 miles aways lies the site of the Battle of Boyne, one more European battle of somewhat small in action and casualties (compared to Waterloo or Gettysburg) but large in historical import. When James II attempted to move England back to Catholicism, the Protestants recruited William of Orange to throw him out. James fled to Ireland, coming up through the south, while William came down through the north. The 60,000 men from Ireland, England, France, Germany and assorted other Grand Alliance country met near the Boyne. William had the high ground, more men, and a better battle plan. James lost and fled south, while the Orangemen stayed north, which led to much later problems.

We lunched in the house behind the battle site on salmon and leek pie. Really, America can’t we figure out how to make meat pie making techniques? I’m ready for a fast food pie restaurant.  A walk in the sculpture garden behind the house revealed giant rhododendron trees with colossal blooms from the warm winter, massive yew trees, and sculptures both whimsical and eye-catching. Our favorite was fish pi because lunch and math go so well together. 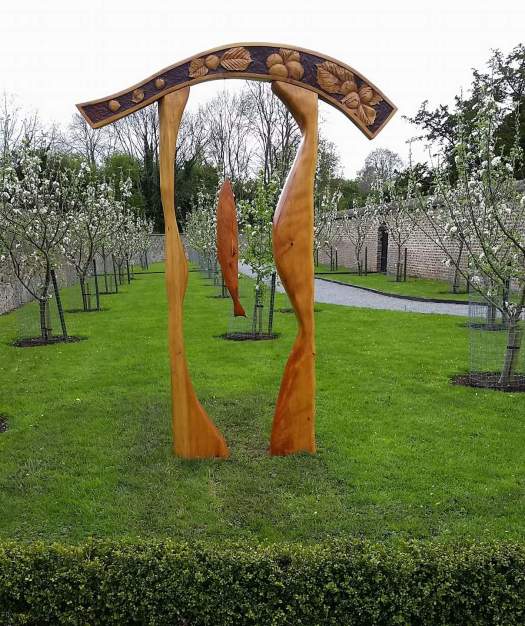 Belfast: A Dose of Wall
The most moving site of these first couple days was the Black Cab tour of the Falls Road and Shankill area murals and one of the peace walls. The cabbies, like many tour guides, were grizzled and garrulous. Our driver’s card said Paddy Himself; we promised him a good Yelp review. Damien with his pot belly and untucked shirt told corny jokes and pretended to do a magic trick. But what he was unveiling was a rubber bullet, explaining how these “non-lethal” six inch long tubes did plenty of killing when the British troops stationed in Belfast during the Troubles aimed for the head or the chest. Many walls still cover most of Belfast, and these old men who lived through it each said, If it ain’t broke, don’t fix it. Meaning that now they help keep the peace that was so long in coming. Outside Ireland, the reports of those times tended to focus on it as a religious dispute, but that oversimplification doesn’t touch the real underbelly of the problem, which was about civil rights, majority and minorities, and how violence begets violence until enough people call an end to the madness.

It’s easy to look at someone else’s city and dispute and call it madness. The inspiring graffitti written all across the wall (and we were encouraged to add our own) is a testament to the world’s hope for Northern Ireland. But I can’t help watch some of the violent clashes within the U.S. that have sparked in the past year and wonder if we’ve ever learned anything from mistakes elsewhere. As we stood and listened to the stories of Bobby Sands and the fragile peace brokered by Sinn Fein, the arctic cold front moving through dropped a tiny flurry of snow on us for a few minutes, until the sun popped through again and we saw the wall in bitter cold sunlight. I couldn’t think of a better metaphor. 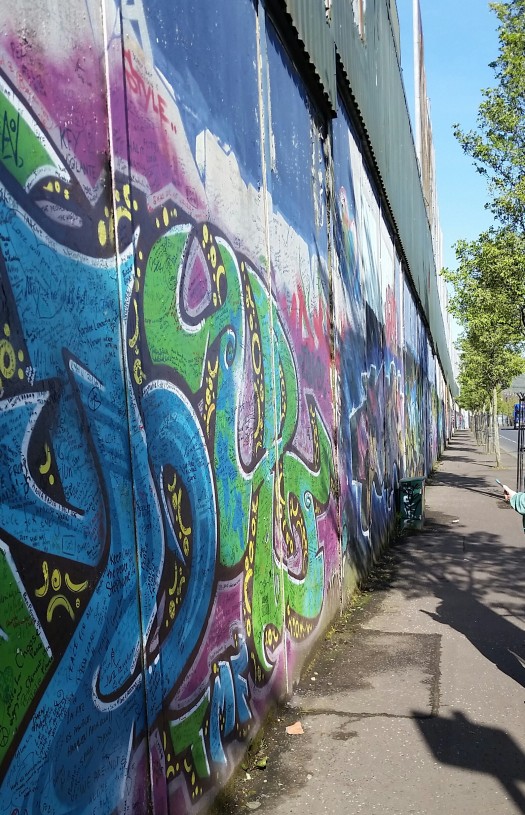 The cabbies do say tourism is up, and Paddy was quite proud to lay out the statistics – tripled in the last ten years and up 15% just from last year. Which makes me even more hopeful, as there is nothing better to prove the peace, than tourists like me.

Being a Tourist
There was so much more even in three days – the Titanic brought to life in the brand new museum on the wharf, lunch at a beautiful Georgian house, an afternoon climb across the Giants Causeway – that I can only imagine what the next two weeks have in store.

Always, too, there is the reminder of the dual perspective I feel as a visitor. One comes to the new place to listen and learn, to absorb and understand the reasons and the contxt of What Happened. Here is the new, there is evidence of history (Newgrange, Battle of Boyne, the Falls Road murals), or this shows the marvels of engineering or local art (the Titanic or a local sculptor).

At the same time, I am always diverted by the familiar when it happens in the foreign place. At the Boyne cafeteria, a woman had two year old twins, and admonished them to stay at the table, while she hurriedly tried to grab some lunch through the slow line. They were being good or tried to be, staying at the table by climbing On it, or having one hold onto a table leg and his brother’s hand, while the other tried to grab at other chairs and napkins on the floor. Their red hair and creamy skin marked them as Irish; but twins are twins everywhere. Mum came back harried with a platter full of grilled cheese and the squeals were universal. Meanwhile, a sign at our table admonished patrons not to feed the cats, Bubble & Squeak, and as proof, a large black striped tabby artfully knocked over a pitcher of cream left by a previous diner before the table could be cleaned. Cats are cats everywhere.

So Leprechaunia but no leprechauns. Instead, green views and green lands everywhere, with a lively mix of ideas and art, plenty of chat and things to see. To paraphrase one of the G7 prime ministers who visited last year: Come visit Ireland before everyone else does.

0 Replies to “Touring the Roots of Ireland”