Rugged. Lively. Solitary. Filled with laughter and song. Windswept. Storytelling, second to none. Craftsmanship. Hands in the soil. Hands on the tiller. The original twinkle in the eye, could be from the wind, could be from delight at pulling your leg. Tell a story, sing a song, take a shot of whiskey to chase away that bitter gust – close the door, quick!

The wind out here, up here, down here, up through the hills, and out on the wharf, is sharp and everpresent. Meandering through Galway out to the Salthill beaches or standing up on the Cliffs of Moher, take heed to keep the breeze from blowing away your hat, glasses, or small children.

Derry & Irish Heritage
Whether walking the walls of Derry, standing among the ancient cairns, or visiting one of the many heritage centers, you easily sense that the Irish are proud of their history. From the story of the potato famine and immigration that ensued to their thousand year struggle for independence against the usurping neighbors, they like to tell the tales.

Some of these heritage centers are sophisticated, with fantastic artwork intermingled with the vintage photographs and high tech displays of tides and linen production statistics (i.e. the Blasket Island or Ulster-American center). Others, like the Doagh famine center, feel more like an Irish version of what we Americans call a roadside attraction. The guide’s thick accent is used for cheesy jokes and stories about the derivation of “dead ringer” or “up to snuff.” The tour seemed to wander in and out buildings out of chronological order, some about the famine, and others about the church, or life in these small cottages through the decades.  When you want to buy a cap at the gift shop, Eileen has to call up Michael on her 1997 cell phone and you step outside to tell him your card number until he tells you, “tat’s good, luv.” 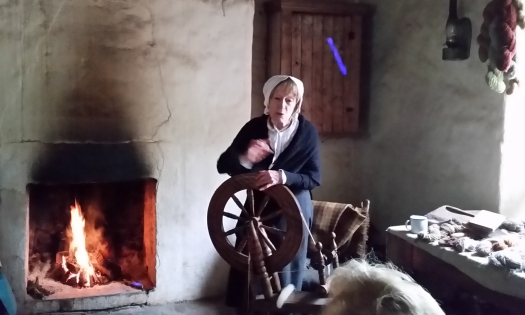 Other centers had a little of both, like the Ulster-American folk park where you read curated displays by the original pictures and then wander among the buildings to see the spinning wheel in action or have a taste of soda bread. You board a ship bound for Pennsylvania and come out the other side to see more familiar 1850 U.S. shops with turkeys and pumpkins – distinctly not Irish. But there’s something about standing in the physical spaces that is compelling. I could read all day about cramped quarters on the ship, and still not understand until I looked at the square sleeping area, thinking that’d be a little small for me, then hearing it was four to that bunk for 10 weeks.

Or at the Connemara center, Martin took us up the mountain pulling the bus with his tractor. It’s rocky, so he took his sweet time, telling a few tales on the way of the O’Haras who built their house here centuries ago.

When he showed us how to cut a bit of peat, he drew lines  to mark every 500 years, so he could chop off the end and declare with a flourish,   “And that all grew before Jesus Christ walked the earth.”

No surprise, that in the cozy cabin around the sweet-smelling peat fire, he offered shots of whiskey. Bringing heritage to life. Slainte!

Proud of their heritage here and their craftsmanship, for whether it’s knitting these fantastic merino wool sweaters or twisting a bit of wire to make a Celtic brooch, everything has a handmade look to it. We went to two pottery places, the famous Belleek factory, and an artisan shop off the cliffs on the Dingle peninsula. As it turns out, my author wife had just learned all about Belleek in order to provide a bit of authenticity to a minor character in her next book. She had just googled “Irish pottery expensive rare” two weeks ago and Bellek was the answer. And, here we were, watching a woman shape leaves by hand to lay across an intricate filligreed basket.

Pride extends from artisan pottery to distinctive food. The pub food was proper, English fish and chips fresh caught or bangers & mash. The full Irish breakfasts included the black pudding. But the specialty of every house was butter and fresh cheese which was so good, we were told, because of the grass. A Tupperware tub from home allowed us to enjoy brown bread and cheese for elevenses every day.

Galway –Beaches and Breezes
Hands keep busy at the cooking or the knitting because the nights are long and the wind is whistling outside. More of that wind comes off the Atlantic on the coast; hard for a Californian to think of the west coast as the Atlantic, but otherwise it feels like a similar coast. Galway which sits on its own bay feels a little San Francisco, a little Berkeley, a little Fisherman’s Wharf. It has a university and a crush of student places with cheap pizza and kebabs that run right down to the harbor. But it also has beaches after a fashion, and when we walked out the 2 km to Salthill, we were buffeted by a wind that pushed back every step. A coffee and a chocolate were most welcome at the tip of the Strand. In April most of the places were shuttered, but I imagine June is crammed with cars and beachgoers.

There were a couple of arcades a la Coney Island, and we found them most curious. One had a Hello Kitty air hockey game only two feet high, awaiting the right sized six years old to come play. Through the whole giant arcade, there were no shooting games– no shooting people, aliens, dinosaurs, rhinos, robots — nada. Zilch! It was blessedly quiet.   Outside, a few hardy souls with strollers were trying their luck at a sand castle, in the twenty minutes that it wasn’t threatening to rain. Do you suppose children of those ancient tribes here built sand castles? Sand caves? Sand beehive stone houses?

We drove around and across the Burren, Connemara, and the cliffs before and after Galway and Dingle. The Burren is 250 square kilometers of landscape of limestone sheets. (I know I’m not Irish because the “rrrrs’ in Burren are desperately meant to be rolled and I can’t manage them at all). Some of the rock is carved by erosion and ancient seawaters that created gorges and tunnels; some pulled together by ancient people for burial cairns and standing stones. Stone walls are laid everywhere, many to mark out the rectangular sheep pastures that lean up hillsides.

One famous spot on the coastal drive was the Cliffs of Moher. Like our American Grand Canyon, the cliffs were stark and impressive, and the sun came out for us to get the optimal photo. Like the Grand Canyon, everyone else had that same idea. The car parks were filled with buses twice the size of ours, and the pathways were filled with people and cameras clicking away. Up where it says “Danger, Do Not Sit on the Rocks,”  hoards of young people were sitting on the rocks, oblivious to the signs. Just like the Grand Canyon.

Dingle: Feile na Bealtaine
The west coast town of Dingle has a famous dolphin in the harbor and a Main street filled with pubs and woolen shops. We also happened to come during one of their busiest weekends, the Beltane Festival which was… oh, what day is it? you lose track traveling so easily, let’s see we started on the 26th…. that makes it April 30th, oh yeah, it’s May Day!

On May day,  some countries celebrate international worker’s day and some dance around Maypoles, but May day festivals are a thousand or more years old. The ancient celebrations built around the solstices and equinoxes are familiar to many, but there were also festivals on the days right between those dates: February 1, May 1, August 1, November 1. The Irish calendar called out the months between Beltane amd Samhain — May to November. The day before Samhain is more familiar to Americans as the day where the spirits of the dead commune with the living — October 31st.

The Beltane festival was spring-based which meant celebrating fertility and hopes for a good harvest. Bonfires might be lit; fun and mayhem might be directed by a master fool. Mummers would don straw conic hats and skirts to put on a show, sing, dance and exhort the crowd to join in. The 4-day festival in Dingle included poetry readings, yoga practice, a Mozart requiem, mask-making workshops, and a dozen gatherings to discuss art, literature, and the ancient ideas — for what is an Irish festival without discussion and poetry?  On the Sunday night in Dingle, they gathered in Dick Mack’s yard, a little spit of grass behind an alley. Traditional music was played while piles were lit for the fires.  Rain had been spitting much of the day, so the fires were small and smoky, but the tenor was boisterous since the rain had at least stopped. There were mostly youths around the fires with beer bottles in hand, shouting and laughing. But in its own cheerful way, that made the gathering seem as ancient as anything. For thousands of years,  shouting, laughing, and a wee bit of drinking have chased away the rain and wind to look forward to spring.

Our guide, Richard, said the Romans came over to Ireland, took one look at the barren landscape and turned right around. They looked past the forty shades of green, saw the rocks and felt the wind, and deemed it too difficult. They weren’t ready to invest the time that it takes to pull beauty out of this land. Yet, the Irish clearly understood how to do it because they’ve created so much and have so much to share, up and down the landscape.

If you listen, you can hear history breathing. Or perhaps that’s just the wind.

In Ireland, they’re most likely one and the same.

0 Replies to “The Windswept West Coast of Eire”

View of the Altamont Pass in Livermore, from Brushy Peak, March 2021.