Can you fall in love under duress? If you lived in a world that required you to mate for life OR ELSE – could you do it? How would you do it? Would you try to fake it? Could you be convincing? What if you had to fool the Spousal Police?

Now the fact that you will turn into an animal if you fail to fall in love with someone during your stay here is not something that should upset you or get you down.
– Hotel Manager, The Lobster

There is something intriguing and dare I say it? fun about a movie in the alternate world, dystopian as the critics call it, the world that seems like our own but is just Off. The Lobster, a 2015 movie now making the arthouse cinema rounds is one of the most interesting movies I’ve seen in a long time. It takes place in a society like our own, with modern dress, skyscrapers, freeways, and hotel swimming pools very much like our own. But it becomes quickly obvious that there is something different going on.  In that sense it’s more like a puzzle, like The Sixth Sense or Fahrenheit 451 or the Memento. Something is different.

The first part has to establish that difference and to give it shape. We don’t need to know why the rules are this way, not at the outset, but we need to know what they are. The setup in The Lobster is that the adults without mates are required to become “guests” at a hotel. They must couple up within 45 days or they will be transformed – surgically, and the less said about those gory details the better– into the animal of their choice. The couples must be validated to the satisfaction of the authorities, so you can’t just pick somebody. Tests must be passed. When the guests are given shotguns to help reinforce the rules, the consequences of failure are clarified.

At the outset, I have to note that I am hesitant to give more detail than that. Even most reviews provide too many specifics about scenes and plot points because half the pleasure (if that’s the right word) is discovering how things work. So I am going to remain deliberately vague and, if it sounds intriguing rather than horrifying, then go see it without reading more about it.

Once we understand the strictures that the hero is subject to, the next part is to see if he can escape or triumph over the rules. Can he cheat – can he escape – can he enlist help – can he corrupt the guards? Lastly, as he tries to implement a potential solution, what are the logical extensions and consequences of that solution?  If you decide to be alone in a world that requires couples, what would that require of you? Would you ever be allowed to change your mind? The Lobster,  created by the Greek director Yorgos Lanthimos, effectively takes you down the path so that as it twists through the maze of bizarre behavior, each part has its own weird internal logic.

If you encounter any problems that you can’t resolve on your own, you will be assigned children. That usually helps.
– Hotel Manager, The Lobster

Of course it would help – in this world – to be assigned children. And, once told that tidbit of information in the helpful “briefing sessions,” it then becomes a plot point when children are assigned – it says something about the couple. And we don’t even follow that tangent down ITS logical path – where exactly are these children coming from that are assigned?

THAT KIND OF MOVIE

So this is a black comedy, an absurdist comedy, a comedy that has more in common with Death at a Funeral than with Mad Max. It is one of those movies that gets funnier after you see it, as you think about it later, whether you find the wrap-up satisfactory or not. There are no car chases or explosions. No one gets drunk at a party and tells it like it is. There is no gazing soulfully into anyone’s eyes. You just need to have a weird sense of humor to enjoy it.

The film is described as “an unconventional love story” but I would not recommend going in thinking of it as a romantic comedy. Oh, no. This is no chick flick. And it’s not even a fun weird romance, like Harold and Maude or Groundhog Day.  Although if it was given a happy-go-lucky sound track, quick scenes cuts, bright pastel colors, and an odd setting like on an island or underwater, then it could be a Wes Anderson-like affair similar to Moonrise Kingdom or The Grand Budapest Hotel. 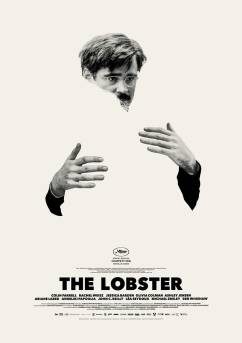 But there are no pink or aquas here; even the swimming pool is gray. The entire movie is drab in color and tone, with a soundtrack populated end to end by string quartets from Beethoven, Shostakovich, and Stravinsky – not exactly happy-go-lucky composers. This matches the marvelous sad sack performances by Colin Farrell, John C. Reilly, and Rachel Weisz.  I kept thinking about the young virile Farrell playing the hitman in In Bruges (another kind of black comedy) and the skinhead villain Bullseye in the movie Daredevil.  Handsome, dangerous, steely-eyed. He’s unrecognizable in his nebbishness here as the myopic jilted husband who pays the penalty for (apparently) being unlovable.

Shakespeare wrote often of the blindness of love and how it bends our ability to think clearly or to “see clearly.” In this world, “short-sightedness” takes on dual meanings as well. It is our hero’s Defining Characteristic which compels him to assess all rivals and future potential spouses in comparison to his level of myopia. (Do you wear contacts or glasses? How thick are your lenses? etc.)  As we get to know him, it becomes clearer that he is metaphorically short-sighted as well. He can’t seem to think beyond one or two actions to see what the outcome is likely to be, which probably contributed to his situation in the first place.

Shall quips and sentences and these paper bullets of the brain awe a man from the career of his humor? No! The world must be peopled. When I said I would die a bachelor, I did not think I should live till I were married.
– Benedick, Much Ado about Nothing

With Shakespeare, Jane Austen, even Margaret Mitchell, we have been taught to root for the romantic lovers, even though romance as a notion is fairly recent in terms of human civilization. Civilization does need to find a way to extend itself –to people the world —  but must love be a requirement? This movie asks whether it ought to be put on such a pedestal, for if romantic love is to be desired over all other types, shouldn’t society then enforce it? The internal logic of the movie works so well that even after you decry having romance forced upon people, you still root for the romance to occur “naturally,” and you cheer when you think you see the love story occurring at last – only to be hit by another two-by-four in the plot – you idiot, weren’t you paying attention for the first hour, why would you still think a romantic ending is a happy ending?

There has been a lot written about this movie since its success at Cannes last year and as it makes the rounds currently in the US. Some reviewers found it disturbing, some overrated, and some “petty” or in bad taste. Yet the fact that it is so thought-provoking is its virtue, since talking about a flawed movie or a flawed imagined society is often more entertaining than the cotton candy experience of a purely entertaining blockbuster. There is nothing like looking at the upside-down world – distasteful as it may be – to make you appreciate your own. If you are currently happily partnered, you will appreciate getting there without coercion. If you are single by choice, you can flaunt it proudly. Even if you’re single not by choice, at least you won’t be hounded by the Marriage Police. Or the Loner Squad.

The Olympics are over, but I miss them already. If you do too, then here are two books to keep them fresh in your mind. One is a quick buffet of tasty topics, and the other a Best Of from Team USA in 2016. Some of the athletes featured in Rio, like Helen Maroulis and Raven Saunders, reappeared in Tokyo.
Click here for more details.

The clouds, the shadows, the golden hills of Livermore, Brushy Peaks. August 2021.