Aliens plop down on earth. Humans wonder what the aliens want. What do they want? How do humans know?  This is the conundrum created by many a science fiction movie and at the heart of the excellent new film that’s generating Oscar buzz, though little attention otherwise, Arrival.

There are a set number of possible options for an Alien Landing plot, many of which have formed the core famous and infamous science fiction premises. Often, the aliens mean harm or pretend to be nice but then mean harm OR some are nice but are fighting with others who mean harm. So getting eaten/enslaved/destroyed is a fairly likely occurrence. But then, how do humans know? Someone has to ask, and how do you speak to an alien?

As most movies are aimed at the lucrative 13-15 year old boy market, many Alien Landing plots involve the shoot first variety. If you google “Alien Invasion,” you can even see the top twenty or thirty of these movie types.  But Arrival is about the communication process itself. Since there is such a huge possibility that the aliens still might have nefarious intent, the armies surround the aliens and point guns at them. You can’t help but marvel at the stupid efficiency of the American army as it erects tents and hazmat facilities and communication centers without the slightest clue of whether any of that will be helpful. (Turns out most of it is not). They at least have the sense to bring in Amy Adams, who plays linguist Dr. Louise Banks, to bridge the communication gap.

The core of what is eventually communicated is the purpose of the movie, so I will avoid saying much about the plot to avoid spoilers. But the mechanics of the communications is fascinating and comprises most of the “action.” This is probably why teenage boys wouldn’t have preferred it to say Battleship or Transformers VII: They Were Hiding Behind the Sun the Whole Time.

Apparently, in linguistics, there are two schools of thought – one that communication is innate and universal with common patterns; another that language varies by culture and influences how beings think. This latter concept, the Sapir-Whorf hypothesis, is championed in the movie, and in fact the characters reference the theory explicitly just in case you aren’t a linguistic expert.  The basic idea is that linguistic patterns influence thought, not just express it. So, as is described here:

We are thus introduced to a new principle of relativity which holds that all observers are not led by the same physical evidence to the same picture of the universe, unless their linguistic backgrounds are similar…We cut up and organize the spread and flow of events as we do largely because, though our mother tongue, we are parties of an agreement to do so, not because nature itself is segmented in exactly that way for all to see. –(Whorf, 1952, pg. 21) from http://www.isss.org/primer/whorf.htm

It might feel that linguistic theory is not a plot device upon which to hang a great story, yet many successful Alien & Human stories use the core understanding/ misunderstanding challenge as the essential obstacle, to great effect.   For example, the linguist C.J. Cherryh, winner of multiple Hugo and Nebula awards for science fiction writing, created a world that humans enter where bipedal native species already exist. Humans communicate. It turns out that the species is peace-preferring, but its culture does not have the concept of “friend/ loved one.” Individuals connect to each other via association for mutual benefit; if the benefit ends, they switch loyalties. This is even true for parent/child as well as married couples.  Humans don’t figure this out, civil war ensues, and 18+ books later, the Foreigner series still thrives on the interesting conflict that derives from this miscommunication. You can’t assume that even the notion of “friend” is a universal notion.

So what do these aliens in the mile high almond ships want – are they aggressors? Are they universal police like in The Day the Earth Stood Still or Star Trek? Are they just going to blip out a few colors and musical notes like in Close Encounters and, as if responding to the Pied Piper, Richard Dreyfuss … or whoever passes for him these days … Jeremy Renner… will blithely climb on the ship?

Nope, not quite that kind of movie. This one is about language. How do you even communicate and how much time would you give a linguist to figure it out before someone starts shooting? Dr. Banks illustrates the difficulty by breaking down the sentence that the army wants to ask: What is your purpose on Earth? In order to get a coherent answer, the aliens must have the concept of a question. They must understand what is meant by “your” – and distinguish between “you” as individual beings vs. “you” as representing a species. And they must perceive the idea of a “purpose,” which is a pretty hard notion to convey when you have to start with Me=Dr. Banks, You=Heptapod. I kept wondering why they weren’t starting with the sentence: You not shoot us.

The story even makes the point that language and communication might be conveyed differently than expected. The aliens make sounds and Colonel GT Weber (played deftly by Forrest Whitaker) asks Dr. Banks to interpret the sounds. However, as she and her physics counterpart Dr. Ian Donnelly (Jeremy Renner) stand in front of the aliens, she writes words on placards. And the aliens respond differently with their own written “language” which is distinct from and not married to the sounds they made.

The language pictures themselves are beautiful and mesmerizing. In the short story that the movie was based on, Ted Levine’s Nebula-winning “The Story of Your Life,” the language is described as a writer would describe it. But the visual representation of this language – Heptapod B – illustrates the charm and the complexity inherent in what the aliens are conveying, which is crucial to the ultimate resolution. A good story in the hands of a deft filmmaker goes one step further to integrate the visual into the plot; that’s why Arrival stands head and shoulders above its other Alien Landing counterparts.

And, frankly, a strong, intelligent woman as central to the plot was much appreciated. It can be debated whether Dr. Banks’ character needed to be female in order for the plot to work. I would say no – you could do the story with the lead as male. Perhaps it’s more effective that Banks is a woman, but I suspect that has more to do with Amy Adams’ subtle and persuasive acting than the requirements of the script. She is no Amazonian Xena, taking on the aliens with super human strength, nor is she frail and incompetent…. Oops! I tripped, please have some man come and help me up before the aliens get me! This might be another reason that the movie was hard to sell, certainly to 15 year old boys.

Notice that in the movie poster featuring the actors, Renner’s picture is the same size as Adams. His face is smaller, but his body in total is the same size and superimposed on top of Adams.  But Renner’s character, Dr. Donnelly, has perhaps 25-40% of the lines and screen time as Banks. Does that mean women wouldn’t know that this strong female character is at the center of the story?  The picture doesn’t sell the movie to 50 year old women. Would men be disappointed that the army isn’t blowing things up the whole time as might be promised by Forrest Whitaker’s combat fatigues shown in the poster? 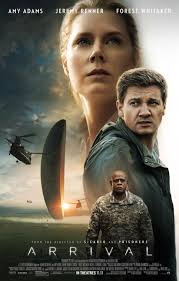 For those who saw the movie, apparently the answer is Not Disappointed. Rotten Tomatoes’ ratings are in the mid 90s and well deserved. Critical response has also been positive, recognizing that a movie wrestling with the complex questions implied by What is your purpose on Earth is a welcome respite from another variation of Independence Day XI: The Vatican’s Revenge.

Then, if you really want to read about a battle, take a look at the linguistic potshots thrown at the Sapir-Whorf ideas by the followers of Noam Chomsky. Because Chomskyites take no prisoners.

Today’s post is brought to you by the DailyPost word of the day: Conundrum

The Olympics are over, but I miss them already. If you do too, then here are two books to keep them fresh in your mind. One is a quick buffet of tasty topics, and the other a Best Of from Team USA in 2016. Some of the athletes featured in Rio, like Helen Maroulis and Raven Saunders, reappeared in Tokyo.
Click here for more details.