A few weeks ago, I highlighted a recent sentiment that Christmas lights make everything better. This is no accident. Tomorrow is the winter solstice, the shortest day of the year in the northern hemisphere. Our body clocks can’t wait for that turning of the tide and, over centuries, our cultures have created one tradition after another to add lights which stave off that darkness. That desire for more light is built into us at the core, even at the cellular levels, within our circadian rhythms.

Hall, Rosbash, and Young won the 2017 Nobel Prize in Physiology and Medicine for studying the phenomenon of circadian rhythms. The basic notion of a circadian cycle is one tied to a 24-hour biological clock, a circuit fundamentally tied to the length of a day, split between sun and darkness. Life cycles, for everything from plants to fruit flies to human beings, have adapted to that 24-hour pattern. Scientists have known for years that key processes that regulate sleep, hormone production, metabolism, and behavior are linked to these patterns. The Nobel scientists figured out why.

Back in the 1970s, researcher Seymour Benzer had discovered the gene in fruit flies connected to this biological clock. When the gene (labelled PER for period) was disrupted, the behavior of the flies was also affected. What Hall, Rosbash, and Young did was to determine how the gene worked. As genes are part of the body’s protein chemistry, they were able to show that PER degraded during the day and was refurbished or re-accumulated during the night, according to the circadian processes. The model became further sophisticated as they showed how multiple proteins worked together to create actions at the cell level and with mechanisms to help light interact and synchronize the clock-like system.

With these genetic interactions decoded, a whole new body of science has sprung up around the impacts to our well-being when the rhythms are disrupted. Problems with sleep patterns, for example, drive everything from weight gain to depression. The jet lag phenomenon is well-known to travelers. The body becomes severely out of sync, and the ruined sleep inhibits digestion, limits energy production, and creates mood swings. The typical advice is to try to stay awake, with the light,  to fool the body back into adopting a new circadian pattern. But even the normal changing of the seasons has the same kind of impact, especially felt in the late autumn as darkness comes earlier each day.

Most who work a normal daytime schedule know the feeling. We have to go to work when it’s dark and, eventually, come home when it’s dark as well. It creates misery, and enhances seasonal depression.  Our ancestors felt this centuries ago, too, even though they didn’t drive on a dark freeway at 4 p.m. Their lives were tied even more tightly to the seasons, so they likely felt the transition to early darkness in the months after harvest time even more acutely.  That’s why festivals worldwide end up tied to the late December time-frame, and why so many include rituals related to lights set against the darkness, and to promoting life among the dying plants. Even the Egyptians, who depicted Ra with a blazing sun as a crown, brought palm rushes into their houses to help the god recover from the sickness that had weakened his ability to pour forth light.

Dozens of cultures incorporated plants and trees — especially evergreen trees — into their winter ceremonies. Eventually, as the holiday evolved into Christmas throughout Europe, it was the Germans who were likely the first to bring in the entire tree, the Tannenbaum. There is an apocryphal story that Martin Luther first introduced putting lights on the trees. Supposedly, he wanted to replicate the sense of starlight twinkling in the night forests that he saw on evening walks. (This seems likely to be more legend than a “fact fact,” as it’s hard to reconcile the idea of scholarly, anti-traditionalist, get-rid-of-those-Catholic-rituals-and-trappings Luther with someone inventing new symbolic rituals. It’s similar to how all interesting quotes get attributed to either Einstein or Abraham Lincoln. But I digress.)

The Pennsylvania Germans were credited with bringing the notion of a Christmas tree into American homes, although the Puritan heritage of many settlers viewed such frivolities with disdain until the mid 19th century.  Queen Victoria, who married a German, was depicted with Albert and family next to decorated trees, and the fascination with this tradition of the royals caught hold in England and spread. Victoria further  populated several European kingdoms and empires with her own children and relatives, which probably also helped such traditions take hold even more.

In America, Edward Hibberd Johnson is credited with turning the holiday tree hazard into something safer. As Christmas trees grew in popularity, so did the reported instances of tree fires, as the lights on trees were created with candles typically affixed with melted wax or simply tied on. Johnson, who worked with Thomas Edison, was the one who used the burgeoning electric light technology to create a string of tree lights. Stories say that he first used red, white, and blue lights and that his first tree was mounted on a circulating pedestal which made the lights blink as it rotated. So began also the tradition of creating over the top lighting decorations.

Cut to 2017, where the tradition is now deeply rooted. Consider that the Rockefeller Center tree is now over 80 years old, stands 75 feet high, and contains over 50,000 bulbs. Take that darkness! Although an argument can be made that the heavy light “pollution” and 24/7 activity that now takes place in large cities like New York creates its own disruption of circadian rhythms. They do turn that tree off at night at some point, don’t they?

The Light That Lasted

I confess that much of my knowledge about other cultures, other religions, is fairly limited. I further confess that much of my understanding about Hanukkah was inappropriately formed by an irreverent and infamous Saturday Night Live sketch of 1984. Blowhard Jim Belushi interviews timid little Julia-Louis Dreyfus who tries to explain the miracle of Judah Maccabee and how the temple oil that lit the menorah lasted eight days instead of one. Belushi spits out his coffee at her description, pronounces the miracle to be the “wimpiest miracle” he’s every heard, and the next thing you know the stagehand is on camera explaining that the show as done for the day.

Even though Belushi’s character is given the hook for being insultingly insensitive, it was hard not to consider whether oil lasting for a few extra days was as impressive as Immaculate Conception.

Then, I was watching Mayim Bialik give the most delightful explanation of Hanukkah that I could ever imagine here. And it hit me like a V-8! The oil lasted for eight days! Imagine if you were stuck in a power outage for eight days, but you were somehow able to light your one match eight times. If you thought you could only stave off the darkness for an hour, but it turned out to be eight hours. If you were caught in a snowdrift and your cell phone said it could only last for an hour, but lasted for eight hours — long enough for rescuers to arrive… that’s a big deal! (Duh!)  A ceremony where they light a candle each night, then add one more, until they have a whole blazing mass is a sight that I wish I’d included in my winter rituals much, much earlier.

This business about staving off the darkness is all well and good for winter in the northern hemisphere. What about everyone in all the southern hemisphere countries, who celebrate Christmas when it’s warm outside and the days are long? We have a couple of kind kiwi friends who have sent us ornaments with Santa in sunglasses or on a surfboard, so I feel for them. According to population estimates, 88% of humanity lives in the north which means we dominate the cultural communication airwaves during December with our complaints about snow and darkness. I gather that those in the southern half of the globe have learned to take it in stride, and use the chance for a good party however they can. Good on ya!

A sizable chunk of people also live in India, which celebrates Diwali, a holiday I have also come to know a little by working with those who live 23.5 hours away from my time zone. From what I can tell, this is another splendiferous holiday that celebrates the triumph of light over darkness. People clean and decorate their homes, buy gifts, and fill their homes and the streets with lights. Sound familiar? Sounds like a good idea! Diwali is celebrated — based on a traditional lunar calendar, like Easter And Hanukkah — some time between the month of October and November. Gosh, I’m sorry I missed it, as it sounds like a great part of the run up to Christmas and would help ease those days when the darkness seems to start earlier and earlier.

I’ll take it all! Candles… oil that lasts for eight days… Diwali… 50,000 bulb Christmas trees… or even just a few lighted presents sitting out on my northern California backyard.  Whatever gets me through the dark. 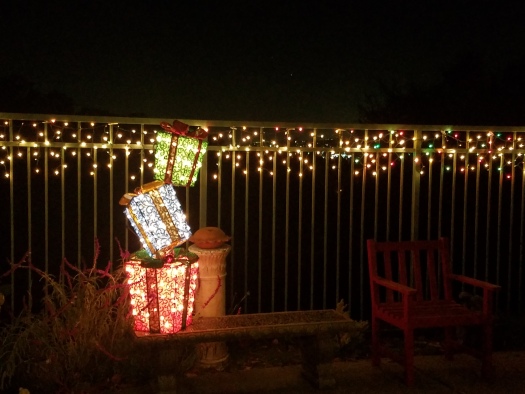 5 Replies to “Calling Out for Light in the Darkness”