They have promised to bring a new dishwasher and microwave today. This is beyond exciting news.

The old ones were older than my college-aged children, and the dishwasher wasn’t a particularly good one. Always noisy with a groaning noise that went on for a long time – we had to learn to set it when we were planning to go to bed, or we wouldn’t be able to hear each other talk. The dishes also never really came clean, and we had to scrub them in advance. Years of arguing at length, what was the point of a dishwasher, why don’t we just hand-wash everything? 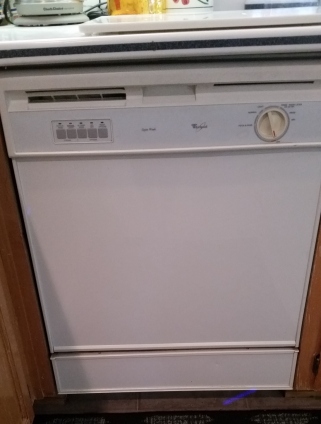 The microwave has been more reliable, except in that last eighteen months. Sometimes when the fan starts up, the whir would make a strange scientific sound as though it were thinking about whether it wanted to start or not. For about a month, we wondered whether it would start at all. Joe, the installer who came to measure, told me that microwaves actually can last for decades. He had one that he gave to his mother, and when she died, his brother got it, then ended up given it to a cousin, until it eventually came back to Joe, who still uses it in his garage to heat up coffee.

Microwaves are strange creatures anyway. I understand scientifically how they heat up food. Heat is just created from electromagnetic radiation, so the microwave is just skipping the part about creating fire that gives out those radiation waves, and instead using waves to directly agitate the molecules in food. I get it in concept. Still, it reminds me of knowing how an airplane works. I understand about air pressure being lower on one curved side of a wing than the other. But every time the plane is in the air – at some point – thinking about it will freak me out. I force myself not to think about it.

The oven has its own personality. The inside never quite makes it to the temperature you choose; we have to set it for 10 degrees higher than a recipe calls for and often still put a thermometer in the oven. The stovetop has awesome gas burners, only they got clogged years ago. Even though my spouse cleaned them, they eventually stopped firing, so you have to light them by hand. The refrigerator – much newer – makes so much noise making ice – ten seconds of whoooosh and then a big CLUNK!  it will wake you up in the middle of the night. Like it’s from Jersey, Whoa…We’re makin’ ice here…

We buy new phones and computers every few years, yet I don’t feel the same way about them as the other machines in the house. Phones now cost about the same as dishwashers, but you wouldn’t dream of replacing your dishwasher every couple years. It just doesn’t seem right.

Karin had a freezer that her parents gave her which sat in the garage. They gave it to her when she bought her first house, and then we moved and moved.  That thing finally died last year – at age 45. Although technically we thought it died because there was a giant leak one day on the garage floor. However, after replacing the freezer, we discovered the pipe to the water heater that sat next to it actually had a leak. So maybe the freezer was still working fine and would have lasted another couple decades.

Is that thing still working? Her parents would say. You still have that?

We get attached to Things, whatever we have. With these physical machines, we learn how to croon to them to make them work. You twist this here, you have to jiggle that there. After all, they do become part of the family.

Since our cars become for its time so much a part of our lives, we typically give them names. Our old station wagon, Fluffy, was smashed up in a terrible accident (Karin, who was driving, walked away with a seatbelt bruise – yay! Seat belts). The Odyssey van is named Penelope – isn’t that clever? Though we mostly call it “the van.” The sea green Prius we named Circiel, after the witch Circe and the sprite Ariel, though often we say “the Prius.” Cusco was our little 15 year old Saturn sedan. Cusco died of a massive heart attack in the summer — I know it’s a car – but it was a heart attack. Poor 18-year old Eleanor, who had been only driving about a month, was leaving work one day about to get on the freeway, and it just coughed and gave up the ghost. Nothing to do with her driving; it was Cusco’s time.

When the tow truck finally pulled Cusco up onto the back with a winch, it was very sad. We had gone a lot of places – a lot of trips to LA, to Oregon, and back and forth to elementary school, middle school, and high school in Cusco. Karin and I were a little teary saying goodbye, but we had to take pictures fast because the tow truck driver was moving pretty quick with his levers and chains. 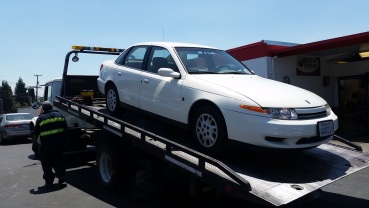 I was going to say that the younger generation doesn’t understand or appreciate this attachment to things, that they have a disposable culture, but actually that’s not true if I think about it. My son prides himself on having the same flip phone that he’s had for about 18 months, and he refuses to upgrade to a smartphone because he doesn’t like the idea of that cult of the next new thing. My daughter learned early how to fiddle with settings for computer programs when they faied. We all know how younger people have no difficulty with the technology tricks required to get their Electronic Things to work, that sequence and swiping voodoo, which is often a mystery to us oldsters.

When my family moved to California in the 1970s, my mom bought a piano. This was really for my brother, who was starting to show some mad skills. (He ended up in music school and with a graduate conservatory degree.) I still have the piano now, and whenever my brother comes and starts rippling jazz riffs up and down the keys, he tells me that I’m never allowed to get rid of it. Though it really does need tuning; these things do, these forty year old things.

I had a bedside clock when I was a teenager, the first machine I ever bought. It had numbers instead of dials, but LED technology didn’t exist at the time. So you had to wind the numbers to get to the right time, and if you wound past the minute, you couldn’t go backwards. You would have to spend another two minutes winding it again, or you would have to unplug for a minute or however long you needed to get the time right. I thought I still had it plugged in on a back room shelf, but I just looked and I think I finally let it go least year. Instead, the clock ticking away in its place is the one my mom had in her office, before she died, years ago.

There on the kitchen wall is the picture that my dad gave me for Christmas one year – a Salvador Dali print where the knife and dishes float about the table. There’s the rocking chair we bought when our son was born so that we could rock him to sleep. Those are the army blankets we use when we go to Shakespeare in the Park – Karin’s dad had them in the Korean war.

I realize we’re surrounded by all these things – machines, furniture, knickknacks – into which we have invested our lives. They represent what we’ve done, who we’ve been with at the time, and what those days were like.

To get a new Thing, like a new dishwasher, is the promise of new experience. The new shiny thing will mean new shiny experiences are ahead.

Today’s blog is brought to you by the Daily Post word promise.

2 Replies to “The Promise of a Newfangled…”