Last night, I reminded my ACT prep class students that this is THE time of year. I teach an eight week course on test-taking strategies to help improve scores, mostly to high school juniors.  I took a minute to step away from studying trigonometry, punctuation errors, author’s purpose, and scientific experimental design to point out that a year from now, they will decide where they’re going to college. Their eyes widened at the thought and there was a lot of nervous laughter. These juniors are in what seems like the 20th mile of a marathon. They can’t see the end in sight yet, despite thinking about it for years and working so hard right now on grades, tests, and applications. This is what seniors in high school – and seniors in college – are doing in the next 4-6 weeks. Many have Acceptance Letters in hand and are deciding where to start the next big journey.

Acceptance letters change lives. If you went to college, you probably remember yours, “Congratulations, future Gopher/Bear/Banana Slug/Spartan! We are pleased to announce that you have been accepted into….”  Some of us also still remember the Ding letters: “…unfortunately, we receive so many applications from worthy candidates….”

Why go to college?

Even though costs have skyrocketed, the earnings potential for a college degree still far outweighs that of no degree. As of 2014, according to a Pew Research study published in the New York Times¸ the cost of not having a degree was about $500,000 over an earnings lifetime, even factoring in today’s high cost. People seeking jobs know that it is a huge barrier to a job, to a better job, to higher pay or a better title in their current job. 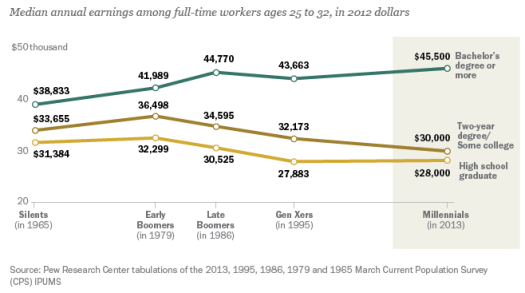 There’s still a national debate about college, and you can see it even in the comments about the statistics regarding earnings. What was fascinating was the number of comments after the study that misquoted statistics, misinterpreted the information, and were so replete with writing errors that their point disappeared, all as part of the argument about why college was useless.

Where go to college?

There is an entire industry devoted to college application, college choice, college funding sources, and the college experience. Big money is definitely involved. Many of the available resources to help you choose focus extensively on the college “style” and “ambiance” ahead of cost, even though cost is a prohibitive factor. Forbes and US News & World Report publish ranking and sort algorithms that help prospective juniors choose. Categories included size of the school, focus on research or topic, whether sports were prominent, and which famous people went there. Cost wasn’t mentioned.

Brand names, the big schools, also become the focus. Everyone wants to get into Yale or UCLA. Yet, cost is a significant factor. Private schools cost twice as much as state schools and the most elite private schools another 25% on top of that. Studies show that the extra cost for going to a brand name school does not necessarily bear out. The Return on Investment, if you will, for an Ivy League is not as strong as for a school that costs half as much. The elite schools will make an argument that their “ambiance” is critical and that you could be in a class with the next Supreme Court justice or CEO. But many thriving entrepreneurs, leaders, and visionaries did not go to a named school.  The best choice is one that doesn’t require a crushing loan burden. A Porsche is a much better car than a Prius, too, but we don’t all assume we should get one.

Also, I found one particular question bizarre, though clearly it’s a generational issue. I can’t imagine asking anyone in 1970 to rate a potential school based on whether it’s more like a Ted Talk or 30 Under 30 Summit. I’m so old that I don’t even know what some of these are, which is probably the point. Do high school juniors really know what all these are?

It is important to visit a school, and go where the fit is right. Suppose you love Chemistry and are thrilled to just barely make it into Princeton, even though you are unnerved on your college tour by the competitive nature of seniors in your group.You pick the “name” school anyway.  But you didn’t go to the Chemistry summer camps that some of your peer freshmen did, you stumble a little finding the classrooms in your first semester, or end up overly social in befriending your roommate which causes you to tank the first midterm. Before you know it, you have a couple of Cs. All of a sudden, professors question whether you “are right” for this major and can keep up, even though you were the valedictorian at your high school. At another school, you might get tutoring or extra time or at least sympathy but, intimidated here among the “brains,” you drop out. You could have been an outstanding chemist or Chemistry teacher, but you give up because you feel you weren’t smart enough. In that sense, the wrong college can send the wrong message.

The best school is the one where you thrive.

The best college experience is where you study something you find interesting, so interesting that you want to study more of it, and then want to do it for a living. Where you go to extra lectures about the topic whenever you can, talk to professors and peers and peers’ parents about what kind of jobs you can get where you do MORE of that, and find ways to demonstrate your passion. College is still no guarantee; it’s not a golden ticket. The job market is competitive and you will still have to fight to make your case among hundreds of applicants. At least you’re making your case for something you want to do. Also, although there are anecdotes about the Decorative Arts graduate or the Anthropology major waiting tables while they have applied for more than a dozen positions, there are millions more anecdotes about those without degrees who will only ever wait tables.

How to experience college?

–Excerpt from “Miss Peach: The College Years” by Catie Rosemurgy

What is college for? It’s quite possible you will learn things that you will not use. College is not necessarily for practical application, although it can be. You might learn something you can use, maybe how to create a presentation after an all-nighter. That’s a skill that will come in handy. As an English major, I learned a tremendous amount about how people behave. I read so many character studies, that I instinctively understood behavior and motivation. Whether it was Babbitt, Raskolnikov, or Uriah Heep – I knew how to recognize them as bosses and co-workers. Occasionally, there was a Gandalf; frequently, there were  Bartleby the Scriveners.

When I was in college, a classmate and I started the English Undergraduate Association because it seemed to be the only major that didn’t have an undergraduate association. I got to know the Dean and the people in the admin office, who then allowed me to use the brand new computers only reserved for graduate students. We printed up oh-so-clever buttons that said “English Majors Do it Literally!” I still have a box of them in my garage.

We had wine and cheese lectures, so I found myself standing at the grocery store picking out wine, which was bizarre since I didn’t drink (and still don’t). Hmmmm…. How little can I spend from our budget? Will anyone taste the difference? How am I going to carry this home on my bike? A professor at one of our sponsored lectures spent an hour talking about earwigs in James Joyce. That was when I learned I wasn’t interested in studying James Joyce. You learn so much in college!

You make friends for life and you start clubs. You argue enthusiastically about politics and music. You learn techniques for debate and critical thinking that you use to prove to your housemates on why Lord of the Rings was superior to Star Wars, why the original Star Trek was better than Next Generation, or how Miles Davis was superior to Dizzy Gillespie – whatever the topic du generation happens to be.

Those high school seniors are about to take a big step. If you know one, send them your affection and appreciation at how scary and exciting a time this must be. They’re about to take on arguing with financial aid and registration offices. Some will move away from home and then put down roots, forcing you to visit them and their new family (one study says 28% of married people found their soulmate in college). Some will change their mind and their major, several times. They’ll meet new people and new ideas and bring them back to Thanksgiving dinner.

The Acceptance Letter is a key to a door for them. They’re about to open the door and walk through to the rest of their lives. Wish them luck!

The Olympics are upon us. Are you a fan? So am I, and here are two books to prove it. One is a quick buffet of tasty topics, and the other delves deep into a dozen of the best from Team USA in 2016. Some of them, like Helen Maroulis and Matthew Centrowitz, will be in Tokyo.