I want to be healthier. I should probably move to Gunbarrel, Colorado. Or Portland Oregon; Rochester, Minnesota; or Highlands Ranch, Colorado. These are all the healthiest places in America, according to multiple ranking studies published within the last year. Being healthier is good, but whenever you look at these Healthy Places studies, you come to some quick conclusions. The studies seem to have issues with their methodology of places or factors, come to very different conclusions, or intermix causal reasons with results. Beyond a slightly interesting headline, most of the rankings as individual places to live aren’t interesting except as a curiosity. But there are conclusions to draw, if you look past the rankings themselves.

I almost feel nervous doing data analysis in this column TWO WEEKS IN A ROW, after the analysis of the Best Actresses last week. But a ValuePenguin study came out over the weekend, and I couldn’t help it. I had to peek at it and got irritated, went digging at the data, and voila! Fodder for an argument!  When I started looking at other similar studies, the need to quarrel with the information got even bigger, and the need to vent even greater. Let’s consider it a public service.

For the record, here are the four studies I looked at, from ValuePenguin, Niche, 24/7 Wall St, and TIME/MONEY magazine:

First, in terms of methodology, the first three were transparent about the specific data they used, the source of the data, and the weighting. TIME/MONEY mentioned, almost in passing, a description of the data but listed no weightings or data sources. In the TIME report, health was only one of many factors that made a place good to live, so they only listed the top ten as part of their overall study and not much else. I believe there is a book you can buy with all those pesky details in it; of course there is!

This is the combined list of the top 25 (or top 10 from TIME). I love me a good color coding, so they’re generically color coded by region. The U.S. map at the top also shows these locations, with markers colored by study.  A few things stand out. First, each study seems to “lean” towards certain regions.

Niche is a neighborhood search website. Its purpose is to help you find good places to live by street address, with advertising from real estate brokers. If you look at the niche top 25 healthy “neighborhoods” as opposed to cities, you find that 15 of the top 25 are suburbs of Denver and 9 of the other 10 are suburbs of Marin. If you look at Niche’s city list, then California places dominate along with the environs of Denver, Seattle, and a little sprinkling of Virginia thrown in.

In contrast, in the 24/7 Wall Street list, small towns in Wisconsin and Minnesota are very heavily favored. What’s particularly odd about the 24/7 list is a disparity between size of “cities.” La Crosse, Wisconsin is listed as one city, but so is –I kid you not – San Francisco/Oakland/Hayward, California. No offense to La Crosse since I have relatives there, but it has a population of 50,000. The SF/Oakland/Hayward conglomerate has a population of well over 1.2 million.  Whatever measure you’re looking at, that’s not comparable not in size, per capita rate, or anything.

Moreover, why in the Value Penguin study, do places in Florida start showing up when they weren’t in the other lists? In theory, if you’re going to look at the healthiest places, wouldn’t there be a lot more consistency between the lists? Why is Hawaii only on one list? How could Buffalo or Boston show up on one list and not elsewhere? Why would Iowa place its stamp so strongly on the 24/7 list but not even show up on other lists?

Getting healthy doesn’t necessarily mean you have to spend a fortune on an expensive gym. It could be as simple as living in a healthier town…
Living a healthier life might come down to having healthier neighbors.
–MONEY Magazine, September 2016

This table I compiled across lists shows the factors and weights (if available) for each of the different studies. A difference in point of view starts to be evident reflecting three different types of weightings. The first type defines Healthy Cities as having healthy people in them. Health = low rates of diabetes, obesity, death from premature causes like diabetes and obesity, or low rates of excessive drinking and smoking. The Niche list, for example, more than half comprises whether people have poor health conditions (obesity) or behaviors (smoking). As a weighting factor, this seems like a circular argument. You should go live in that healthy place to get healthy because there are other healthy people already there. Does moving to a place where people are active or don’t smoke or don’t have diabetes make you healthy? Not by definition. This is why MONEY magazine’s tag line seems misleading – you don’t need to go to a gym, just move to a town with healthy people in it. Living next to healthy neighbors….makes you healthy? I hardly think so.

A second main set of factors is access to health care itself. Places are considered healthy cities if there are a lot of doctors and hospitals or access to mental health (!!only Niche includes that) or if a lot of people are covered by health insurance. As we’re going through a significant debate right now about how to cover people with health insurance (or NOT as the case may be), it’s curious that two of these studies consider the percentage covered by insurance to be an indicator of health. So if your neighbors are more likely to be covered by health insurance, does that make you healthy?  It does if the county or state makes health insurance more affordable, and we know from the current debate that there’s huge variation in health care access by location.

The last set of factors, and the only ones that I would describe as causal, are access to things that make you healthy. The Value Penguin study leans in this direction and, in fact, labels their list the “Health-Conscious Places to Live” rather than healthiest. But their factors are the ones that actually make people healthy. In this view, a healthy place is one that has access to healthy food, places to be active, and clean air and water. As I dug around in their data sources – which they were the best at providing – I did find a few issues. I could argue with whether having access to healthy food means having more organic crop acreage or a lot of farmer’s markets. Or, I don’t know if # Gyms per capita is really valid when a place like downtown San Francisco doesn’t have a high number of gyms but instead has a few huge multi-story gyms. I also found it curious that somehow Irvine could end up high on the healthy list based on the environment, but Santa Ana and Anaheim would not – they all share the same air.  Finally, I could not figure out how Buffalo, NY somehow ended up as the best place in the country for Healthy Food access. Really? More than Marin or northern California where we have Farmer’s Markets on every corner and organic food has a bigger section in the produce department than non-organic? But these are quibbles. I agree with the premise. A healthy city – one that you might want to move to – is one that has access to things that make you healthy.

What about the best of all possible worlds?

If you look back at the first map, the clusters across all the studies start to pop out.  I took all the top 25 lists and attempted to assign ordinals (suggested by my spouse). Which cities were on the most lists (none was on all 4 but several were on 3 out of 4) and which of those ranked the highest?  This is the top eleven I gleaned, and you are now free to quibble with me: 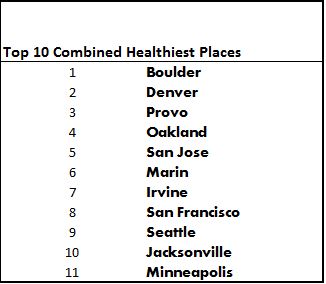 Regardless of the methodology, it’s very clear that Boulder and Denver are damn healthy places to live. Utah is also high on the list as is Northern California, a piece of Southern California, and the Northwest Coast. Several places in Minnesota do have the lowest premature death rate, so there seem to be something going on there worth exploring. If we leave out California for a minute, and we add in Buffalo with its mysteriously “healthy food,” there does seem to be some link between snowy places and health. They need to be green, remote, snowy places, though, since Chicago and New York weren’t on any list. Also, skiing and being at altitude seem causative. If you can survive it, living in the Rockies makes you healthier. Hmm. Canada?

In the end, I found it wasn’t particularly helpful to know exactly where the healthiest places are, but it was really helpful to think about why people are healthy where they live. Access to health care, both financially and physically, is critical. Access to greenery that you can run around in and eat are also important. If you’re a skier, keep it up! Come to think of it, I’ve never met a fat skier who smokes and drinks to excess. The rest of us non-skiers will just have to run around twice as much, four times as much if we’re not at altitude. I’m not moving to where it snows, though, sorry.

0 Replies to “Moving to Healthy”