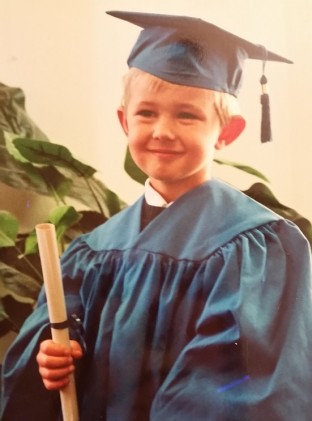 When my son was a baby, we used to joke that he folds up for compact storage. Even when he was six or ten, and would sit on the couch hugging his knees, we would say: See, he still folds up. Now at 6’2” and at 21 years old, I can hardly remember him – I play back the film reel loop of his life over and over but I can no longer imagine him – small.

I also called him my Favorite Son, and at around five, he finally realized, Hey! I’m your only son.

So, what?  I would say. You’re still my favorite son.

The child becomes the adult
We were in San Diego over the weekend for Commencement, an interesting word for it. On the face of it, the university graduation ceremony is a celebration of ending, of four years of grueling intellectual, sometimes physical work. But it is a beginning of a phase of adulthood. As my Favorite Son has taken this effort so much in his own way, we are here to celebrate with him and to see what he has become.

I have already seen the adult pop out. Last time when he was home for Christmas, he rinsed his dishes AND put them in the dishwasher without any prompting. He bought Christmas presents for each of us and explained the thinking process behind them.

But he is still my son, still the child with the peculiar habits. When we arrive at the parking lot for his apartment, he has come downstairs, still hoping we won’t want to see his room which is college-student messy.  (We insisted, it was messy. Five students living in a two bedroom apt, mess is no surprise.) He is wearing the same long-sleeved Christmas-themed shirt I have seen him wear for three years. It is 85 degrees in San Diego, and the rest of us are in sleeveless blouses, sandals, and dresses. I plead with him to spiff up a little, and he shows me the one nice button-up shirt he has, creased as if it has been crumpled in a corner since the last time he wore it, probably high school awards night. Under the black slacks are tennis shoes. I’m not wearing a jacket; I wore it to the interview like you told me, but to the ceremony now? Forget it.

The interview was for a graduate school that was recruiting him. He had more than one offer and has chosen to stay at UC San Diego to pursue a doctorate. We are heading to the department ceremony, where he will be presented an award and his graduation certificate, be called up for a photo op in a line with the other twenty graduates. The shirt lays loose in his hand until we start to climb the four flights of stairs. By flight two, it is on his back; flight three, buttoned up; flight four, neatly tucked in and presentable as we walk in together.

Five minutes before the start, the department advisor pulls him aside, apparently to tell him that the award presenter wasn’t available and ask that he make some sort of quick speech, explaining his work. OK, adults in the room, how many of you are excited to do that? When asked, he takes the microphone like he’s been doing it for years, and calmly and sincerely expresses gratitude to his Faculty Principle Investigator for “taking a chance on him.” He entreats other professors out there to do the same for future sophomores. Other students, asked to make quick speeches, immediately repeat the same theme. Trend-setter!

What I see is that he has learned how to do what is necessary. That is the difference between adult and boy. The adult sees what is required and no matter how much he does not want to do it, does it anyway.

Can you see the potential adult already in the child?

Give me a child until he is seven and I will give you the man.
—Francis Xavier

Michael Apted made a series of documentaries starting with 21 Up, tracking children every seven years. (He’s working now on 63 Up.) You saw the children become adults; you became fascinated by how they turned out. 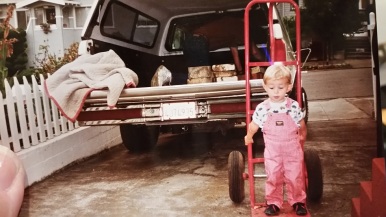 To me the story of Favorite Son is the one I have told often, as it happened when he was not yet two. He was a 90 percentile-sized toddler, capable of doing physical things ahead of others – in theory. But at a year and a half, he hadn’t walked yet. Sixty pounds of dead weight pushed around in the stroller, through grass, mud, or gravel. We would coax him, we would put his hand in ours, C’mon you can do it! He would sit down and look at us the way a dog does. What do you want from me?

We took a trip in a motorhome for several days, and he would mosey around inside, holding on to the benches as we toodled down the highway. At the tourist spots, Stroller, please! But when we arrived home at last, carried him down the steps, and put him on the ground, he ran up the driveway. Been there, done that.

I have watched him learn this way his whole life. He doesn’t seem to be paying attention; he is texting under the table; he is watching television; he is looking somewhere else. Later, when I say, I am impressed you did so well on your exams or Gee, you are so good about saving money, he says, Well you told me to. You said I had to. Did I? Were you really listening?

I am still surprised that he chose Physics. Not surprised that he could do it, but I must set the context here. People hear Physics and tell me he is smart. Not to put too fine a point on it, but his two parents are very smart. His sister is extraordinarily smart. His uncle is quite smart. His two grandparents were geniuses; trust me, I had their expectations on my shoulders growing up. Even if he didn’t have all those genetics in his favor, from my point of view, of course he is smart – he is my son. What mother doesn’t expect their child to be a genius? That made it all the harder to see it when it happened.

He was not that geeky kid in high school. He was a long-haired skateboarder, a “live wire,” as one teacher called him. He was sarcastic with messy homework and minimal effort put into final projects. He nearly flunked algebra (although that was the teacher’s fault, truly!) and got a D on his summer homework for AP History. When he later received top honors in high school, the other kids looked at him like, Who’s that guy?  He flew under the radar.

By October of his freshman year, he told us he was majoring in Physics and he was all in. As a college junior, when we asked why he settled on Physics of all things he said, I wanted to see if I could do it.

And when he was ready to run up the driveway, he could do it.

You cannot help but see yourself
There were three separate ceremonies. After the small departmental one, a giant conclave of all 9000 graduating seniors was convened. The Dalai Lama was the commencement speaker. His Holiness is our human Yoda. (Actually, Yoda is the Dalai Lama of Star Wars.) Small, broken English, quirky mannerisms, giggles a lot, few words, and everything said was exceedingly profound. He insisted on wearing a Triton’s visor instead of the doctorate mortar board they originally gave him.

The last ceremony was the one for Favorite Son’s college that required the cap, sash, and gown and included the perp walk where names were read aloud for parents to hoot and cheer. When his lodge pole pine body appeared in the 60-foot high screens and they read his full name, including the middle name that we chose for my friend who died of cancer way too young, my heart skipped a beat.

Running through my mind were my own ceremonies at Berkeley and in Chicago. I don’t remember who spoke, but the Literature department speech ended with, As Virginia Woolf would have said, ‘Go Bears!’

I can not help but see myself in this young man. Being late makes me anxious, so I am punctual. I am still friends with my roommate and remember us studying calculus together, challenging ourselves on the extra credit problems that others didn’t even try. I tease my son about his frugality, but I remember someone at my internship describing me as so cheap that I squeak. There is a school photo of me in 4th grade band where – next to the students in fancy dresses, ties, and loafers — I am wearing a ripped jumper, shorts, and filthy tennis shoes. The older Favorite Son becomes, the more he will realize that I can’t tweak him any more for things that are such reflections. I certainly know it.

He has his Own
But Favorite Son has carved a sense of self beyond these genes and this upbringing. He likes to wear a certain type of winter boot socks, regardless of the time of year or type of shoes. He has about 75 pairs and when he does laundry, it’s mostly socks.  He hasn’t cut his hair since high school. As I observed the other physics professors with their neat pony tails, it occurred to me that he may never do so.

He goes deep into subjects and keeps the list short. He knows everything there is to know about skateboarding, Star Wars, and soon quantum mechanics. (Or High Energy Physics? Condensed Matter? The terminology is now out of my league.) For Christmas and birthdays, he asks for physics books to read “for fun.”  I will take credit for the Star Wars as I bought him the DK Eyewitness Guide to The Phantom Menace which he read until it literally fell apart.

As a freshman, he formed a posse of close friends, who are now his roommates. They were thick as thieves over the graduation weekend. Best friends for life, you could tell.

He has a biting sarcastic wit, and you know when you hear a real zinger, that he actually cares about you and the conversation or he wouldn’t have bothered.

I asked him if it would be all right to write about him in the blog. There was a time when it would have prompted eye-rolling or Hell no!  But he didn’t even sigh. Sure, if that’s what you want. Like an adult, to suffer the embrace and pride of his parents in whatever form it takes.

Leo, Taurus rising is a very good sign
I managed to keep my emotions in check for all three of the events, cheering but not too much. I better not hear your voices in the crowd, mom… On the ten hour drive home, I finally lost it when a Kenny Loggins’ CD played “Danny’s Song” and “House at Pooh Corner” back to back. We had a Pooh theme in the nursery. There were these jingly stuffed Pooh animals in the hospital where I was in labor for three days. I remember my wife waving the Pooh at me after a wave of pain, the little bell jingling, “Good job!” and I replied with a truck driver’s expletive.  My son was born with his head squished, looking at me suspiciously. What are you going to ask me to do next?

Nothing now. My work is done. It has been for while.