We embarked upon our Grand Tour this week as only empty nesters can, carefree and with good walking shoes. In my mind, I’ve labeled this the Tour of a Lifetime and, since we are heading to Scandinavia, have dubbed it the Fish Slapping Tour. (See Monty Python). First Stop: London.

Third Time’s the Charm
The third time you visit a city, I am now convinced, is the best. The first time, you had to see all the touristy things because many of them are interesting even if touristy. The second time you brought the new spouse or friend or you saw two new things you couldn’t pack in the first time. The third time, though, you aren’t Obligated to do any of that. You also now have Your Favorite things to see again, and those things– those favorite restaurants and artworks and shops and short cuts to places– are old friends. Karin had a writers’ thing the first time in 2005 and then we brought the kids in 2006, and had to add Stonehenge and Westminster Abbey to the obligatory tours of the Tower of London and London Eye and British Museum. But theis time we didn’t need to do any of those; yet, we don’t live there so we felt free to wander and gawk and it was amazing. We decided to have no specific agenda aside from two unvisited museums and to go in search of statues. It turned out to be my favorite way to see a city. 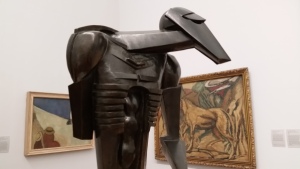 The statue idea came about last fall when Karin happened upon an audio book series written by Charlie Fletcher, starting with the intriguing Stoneheart. Read by Jim Dale, the books are about two preteens George and Edie who slip into an UnLondon where the statues come to life. While the trilogy had familiar battles between light and dark, it didn’t have the overused wizardry that magic stories often do. Instead, George must battle and befriend statues both good and evil—spits and taints as the books label them—to keep the bad spirits within the stones from taking over London.

I will write the full account of the journey with all pictures later, for fans who might read the books. They’re gaining in popularity. There were many google references to the books and statues, though none that tried as we did to lay them out in logical order, which made it challenging. The books are highly recommended and have sold decently well, so I was surprised no one had posted this exact “tour” although I’m sure people have tried it.

City of Layers
One of the wonderful things about the statues chosen is that they had so much variety to them, both on the good and evil side. London is a city of many layers.

As Fletcher writes in the second book, Silvertongue, the Tower of London is now a museum and display for the royal jewels. But before, it was a prison, and before that, a Christian church and a Roman temple and, even earlier, a Celtics shrine to a crow goddess.

The city is constantly under construction—as all large cities are. As you walk around, the ancient turrets are next to granite rectangles from the 1950s and 1970s, framed by glass and steel diagonals from the last few decades, only to be topped by cranes building the next fancy thing crenellated or curvy or swooping facade. Statues are ancient and modern, gargoyles and shapeless curves, renditions of horses that could be centuries old or done last year.

Looking Everywhere
We walked for three days looking for statues. We took the tube all over the City of London, often during commute hours. I spent years navigating Montgomery Street BART at the height of rush hour, but I have to say Londoners– at least in the big underground stations like Victoria- were quite rude. They literally rush in a drove past and through you often not looking and on their mobiles. We had two people roll their suitcases over our feet as if we weren’t there, and another went whizzing by us on crutches. You literally know who the tourists are because they’re the only ones stopping short of violent collision. Jostling is apparently no big deal.

There were friendlier people out on the street because we asked for directions. A lot. Mostly we asked people if they knew where specific statues were. Surprisingly, people were not so informed about that. The funniest was the uniformed young lady with Information printed on her cap standing next to a tourist map outside Charing Cross station. She not only didn’t know where the statue of Samuel Jonson was, she’d never heard of him. And she Googled it and also shook her head, sorry, luv (“these bloody tourists and their crazy ideas”). Apparently, she only knew where the London Eye and the pizza places were. The statue of old “Dictionary” turned out to be only two blocks away.

What made this process great was the looking. There are pictures on the Internet and there are guided tours you can take for things but searching on our own had its own benefits. We had to constantly look up, so it was amazing how many statues and ornaments were all over. Like this pterodactyl hanging on tbe side of the Natural History Museum. He chases George to start thw whole thing. Every building practically, the lamps, the benches, the signs… I have resolved to come back to San Francisco and create a similar tour. Look up several notable places and – without a tour guide—go find them.

We also got lost constantly. That turned out to be part of the process, perhaps not so fun at the moment, but amusing when we found ourselves again. Three statues we never found ; that’s not so fun, to look and look and then figure out it was probably moved, most likely due to the construction I noted before. The Barbican Center was a real trial. In the books, George has to search through it because the Minotaur has kidnapped Edie. And true to the metaphor, the Barbican is a hideously designed labyrinth of concrete and metal walkways and levels that don’t connect or Escherlike, seem to bend in unnatural ways. We finally found the Minotaur, and he looked as grouchy as we felt. Later, looking for the sculpture of Icarus made by the same artist, we couldn’t find him at all. Icarus had flown away.

Time for a Snack
I wanted to see all the statues if we could, but of course we aren’t used to walking literally five or six hours a day. Refreshments were needed often. Borough Market recommended by a local was a gem; like Chelsea Market in New York, or other high end farmer’s markets. The cheeses! the steak and chicken pies! Licorice fudge! The clotted cream fudge!

Also, three o clock is a good time to sit for a long rest, especially at a library, where the bathrooms are clean. Of course, if you luck out and are at the British Library, then when you wander back from the toilets, “oh look, let’s go in that room marked ‘Treasures’… holy Magna Carta!” We saw original manuscripts by Dickens, Austen, musical scores handwritten by Bach, Puccini, Mozart, letters from Churchill and Queen Elizabeth! Gee, that was a good idea… 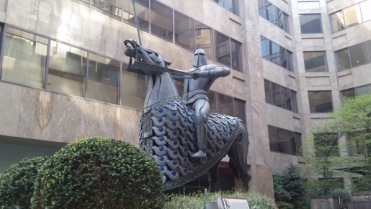 My favorite find—other than the whole experience—was the Knight of the Cnithengild. In the book, he’s the Last Knight. He challenges George to three duels, on land, under earth, and under water. (Note to self, when magical beings ask you three questions, don’t stupidly answer Yes three times thinking they didn’t hear you the first time… classic binding spell.) Our 13th Knight was in the middle of a modern office complex between the insurance agencies and the coffee houses. The land was originally an East India shipping warehouse and before that a church and then a Templar holding and before that a rubbish heap and before that…

The Final Tally
• 3 days of walking
• 87,912 steps
• 37.2 miles
• 17 different tube stations
• 2 pies, 3 cheese, 4 different kinds of fudge
• 12 diet Cokes and 6 bottles of sugar free Mountain Dew. The Mt Dew was very sweet and very limey. The diet Cherry Cokes was the cherriest I’ve ever had.
• 23 statues found, 5 not in the book but suggested by local friends and 3 never found
Where, do you suppose, are the most interesting statues in Oslo?

Next stop, the ship!